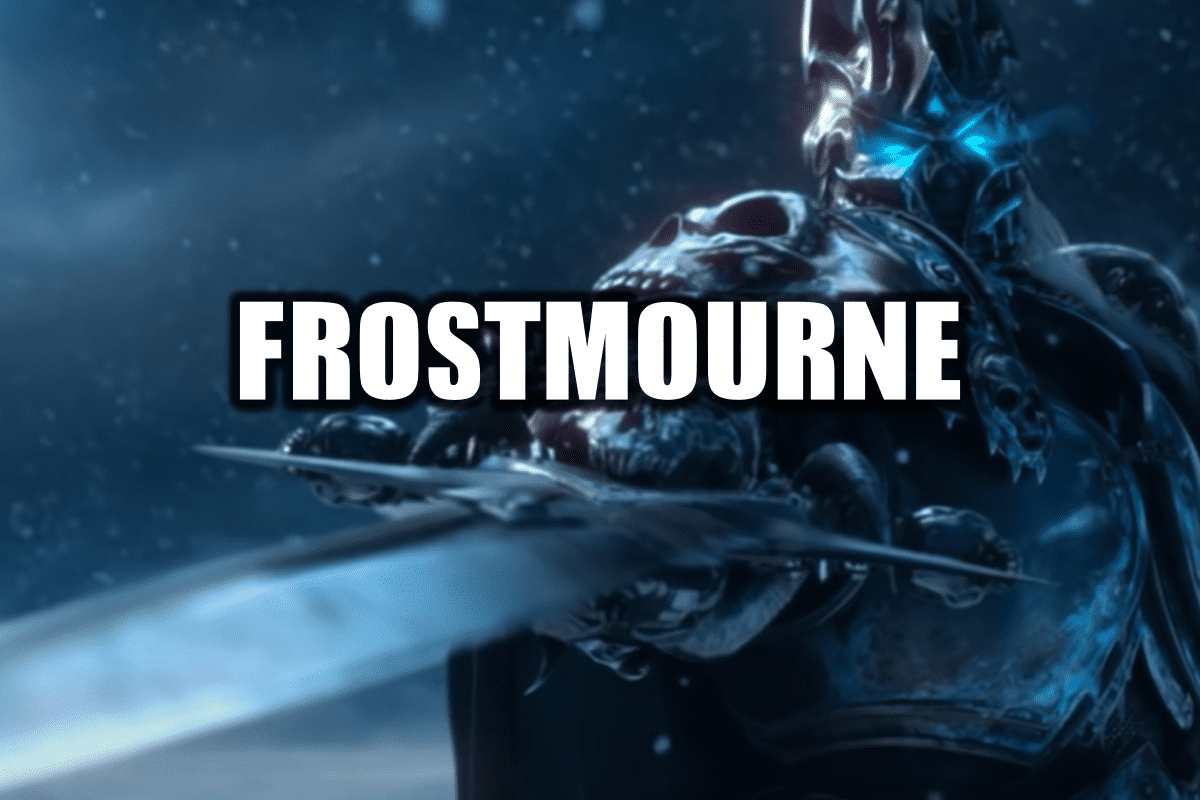 This article is for all the fans of Warcraft 3, the game that changed forever my life! In this article, I’ll guide you through the W3 world to better understand all the unknown about Arthas Cursed Blade: Frostmourne!

Let’s start now with some context!

Known as Frostmourne, it was the runeblade Ner’zhul, the Lich King, hurled from the Frozen Throne hoping that Arthas Menethil, his unknowing prospective host, would come upon it while traveling across the continent of Northrend.

In the aftermath of his loss at Icecrown Citadel, Arthas, the current Lich King, held the staff until it was shattered by Tirion Fordring, the former Lich King.

When Kil’jaeden changed Ner’zhul into the Lich King, his departed spirit was bound to a mystical suit of armor and also the runeblade, Frostmourne, which he wielded against his enemies.

The armor and sword are now imprisoned within an ice mausoleum known as the Frozen Throne. Were created by the Nathrezim to confine and restrain the Lich King.

Ner’zhul’s Plan for Getting Away

Ner’zhul was dissatisfied with his status as a puppet in the hands of the Burning Legion, and he set about devising a strategy for escaping.

Using his abilities, he forced Frostmourne through the ice and out of the Frozen Throne, sinking it into the snows of Northrend to wait for someone who would grab it and serve as the Lich King’s envoy.

Fortunately, Ner’zhul was able to find an accomplice in Arthas Menethil, the youthful prince of Lordaeron, who had traveled to Northrend on a mission to put a stop to the disease.

Frostmourne In the Hands of Arthas

The dreadlords base was swiftly destroyed by Arthas, who retreated to his base with his blade in hand and launched an all-out counter-offensive against Mal’Ganis. In a confrontation with Arthas, Mal’Ganis informed him that Ner’zhul had anticipated his intention to seize the wicked sword and that the blade had now snatched Arthas’s soul.

To his astonishment, Arthas was using the runeblade to kill the dreadlord at the Lich King’s order, despite his claims that Arthas was now on his edge.

Following the loss of his soul to the Lich King, Arthas fled into the frigid wastes of Northrend to seek solace.

Arthas had been corrupted by Frostmourne, as stated in the warning, and he exploited this corruption to murder his own father when he returned home. With no hesitation,

Arthas, who was now a disciple of Ner’Zhul and a Death Knight of the Undead Scourge, obeyed his new lord. For years, Arthas relied on Frostmourne as his primary weapon of choice.

Arthas was resolved to halt the illness from spreading throughout Lordaeron because he was committed to the safety of his people.

Arthas have been corrupted by Frostmourne Sword. Arthas successfully defeated the demon Mal’Ganis by wielding the cursed runeblade Frostmourne, but he suffered the loss of his soul in the process.

When it comes to stealing life from its victims, Frostmourne also has the power to steal the souls of all who get into contact with it.

Frostmourne has the power to allow the Lich King could see through the eyes and hear through the ears of anybody who holds it; this superpower cannot be suppressed by any earthly means, even death.  The Lich King has the ability to converse with the wielder telepathically at any time, on any realm, at any range.

The Lich King makes use of this ability to attempt to corrupt the holder over the course of time. This has many consequences. If you have Frostmourne in your possession, you will not give it up without a fight.

Over time, the individual will progress from being good to neutral, eventually becoming evil. A non-undead evil bearer will then become undead as a result of the spell. At long last, the blade is successful in sucking the soul of the entity into it.

Frostmourne then maintains the memories and abilities of the person who was killed by it. It is possible that the wielder’s original body will remain within one mile of Frostmourne, and that the sword will keep control over the body, and that he will not be entirely aware that his awareness has been transferred to the blade.

The sword loses its power to control the wielder’s body after one mile, and the wielder, of course, becomes acutely aware of his current situation.

How Frostmourne was Created?

Supposedly created by the Demons of the Burning Legion, Frostmourne was utilized by Kil’jaeden as a painful procedure of resurrecting the Orc Elder Shaman, Ner’zhul, into the Lich King.

The Helm of Domination was also used in this procedure.

It is said that the blade contains multitudes of spirits, as per the soul of King Terenas Menethil II.

Can Frostmourne Be Broken?

Frostmourne was broken during the last fight against the Lich King in the Frozen Throne when the weapon Ashbringer, held by Tirion Fordring, struck it.

The hundreds of souls imprisoned inside the blade surrounded the Lich King, causing him to be suspended in the air, where he was killed by the champions who had gathered to destroy him.

The Motivation Behind the Jailer’s Creation of Frostmourne

The original purpose of the Helm and Frostmourne was most likely to funnel souls back to the Maw, therefore empowering the Jailer and eventually allowing him to be freed.

Ner’Zhul and Arthas were able to put a stop to it and retain control over the spirits for their own reasons.

Which Souls Have Been Imprisoned in Frostmourne?

A listing of Frostmourne was responsible for the deaths of the characters listed below, as well as the loss of their souls.

In all likelihood, with the potential exception of those who were resurrected as undead monsters, it is assumed that their souls were imprisoned in the sword until it was destroyed.

Will Arthas make a Reappearance in Shadowlands?

It’s fair to expect Arthas to make an appearance in Shadowlands at some point, even if it’s in a later update after the game’s initial release.

Arthas Menethil, for example, is a legendary character who will almost certainly feature in the expansions at a certain point.

He’s already been dispatched to the Maw, so it stands to reason that gamers will come face to face with him there.

Final Takeaway: Did you know?

Stormbringer, the sword carried by Elric of Melniboné in the fantasy series of books written by Michael Moorcock, is unmistakably an inspiration for Frostmourne. Stormbringer is a black sword inscribed in runes that takes the souls of those who are murdered by it.

It was first introduced in the novel The Stealer of Souls by Michael Moorcock, which was released in 1963 and was titled, not surprisingly, The Stealer of Souls. It’s worth noting that Stormbringer has a sister weapon named “Mournblade,” which may be the explanation why Arthas’ weapon is referred to as “Frostmourne.”

The action game X-Men Origins: Wolverine contains a secret cave that may be discovered. Wolverine discovers a skeleton with a yellow exclamation mark over his head. Related to that of a World of Warcraft quest giver, as well as a sword that appears to be a copy of Frostmourne.

If you find this chamber, you will get the “WoW!” badge or trophy, which will be awarded according to whether you are playing on the Xbox 360 or the PlayStation 3. The following passage from the Achievement’s explanation verifies the reference: “As you inspect the skeleton and notice the name “Arthas” engraved on a nearby sword, you begin to feel chilly.”

A mock-up of Frostmourne’s hypothetical stats as a World of Warcraft item was displayed at the Lore Panel at BlizzCon 2007, most likely as a spoof. In the product tooltip, a statement reads, “Hail to the King, Baby!” This is a line that was made famous by Bruce Campbell’s Ash at the conclusion of Army of Darkness.

When it comes to blades, Frostmourne has some parallels to another blade that can be found in the Legacy of Kain video game series: the Soul Reaver. Both have the ability to absorb spirits, and both are held by aristocrats who have fallen prey to corruption.