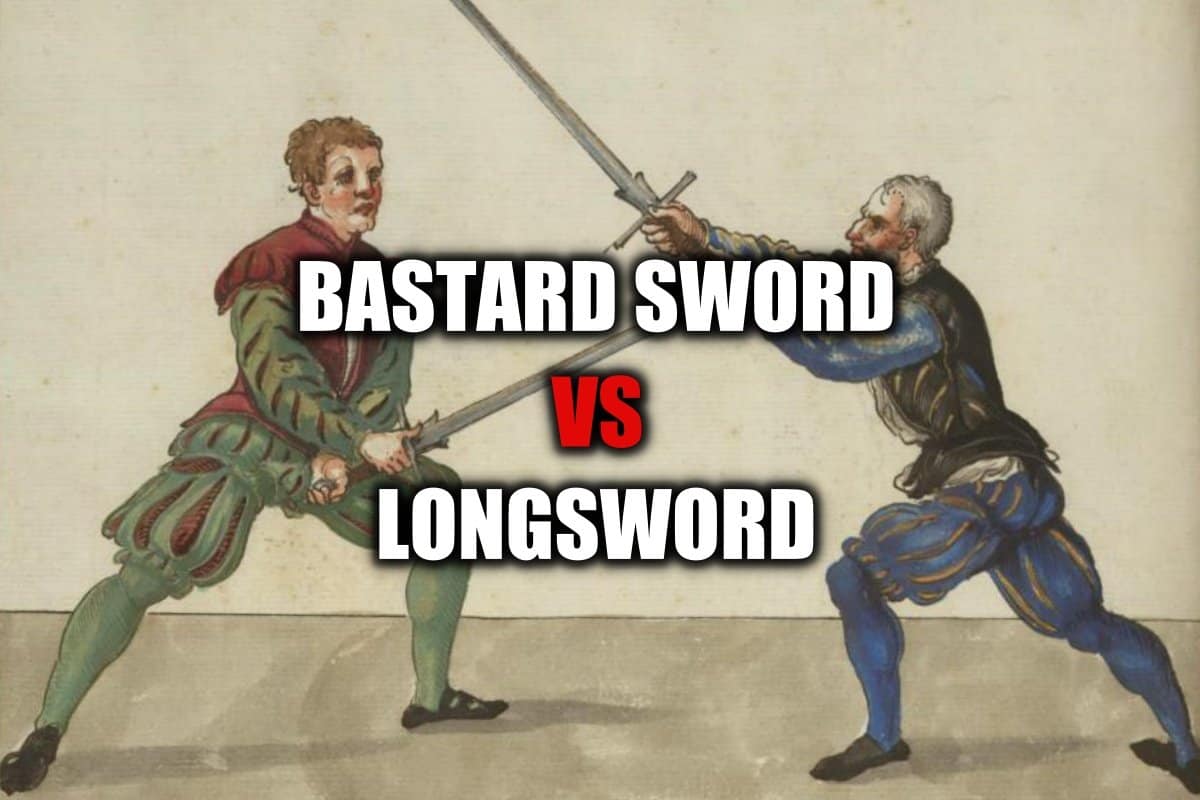 There’s a difference between a bastard sword and a traditional longsword. Although both are classified as longswords, they have significant differences. It is therefore necessary to consider what is meant by the term longsword before we can understand what the work of the longsword was.

It is immediately obvious to the prying eye that the longsword was simply the largest of the swords contained within the group labeled swords. It is an umbrella term whose scope is large.

Ewart Oakeshott, the medieval scholar, and sword collector described bastard swords as “hand-and-a-half” swords that is in-between arming swords and longswords. They could be used with one or two hands on the hilt. Generally speaking, a sword is considered to be a “longsword” if it is primarily used with two hands on the hilt (except in armor, of course) because the two-handed grip is the defining characteristic of a longsword.

Furthermore, the term bastard sword describes a sword that lacks the defining characteristics of a longsword. A bastard sword is generally used in a single, two-handed grip. It can also be used one-handed, but not as effectively. Oakeshott gives the example of a bastard sword as being similar to a rapier. This is an apt comparison.

A bastard sword will generally cut less easily than a real longsword not because it is not as sharp as a longsword, but its weight does not allow it to have the necessary force to effect more cutting damage than a longsword when swung.

What is Really a Longsword?

The longsword is a late medieval / renaissance weapon. It’s designed for use with two hands. The longsword was characterized by a cruciform hilt with a pair of straight quillons, and a compound-tipped blade with a flattened diamond cross-section.

However, the term longsword was used in the Middle Ages to refer to a variety of weapons with an intermediate or long reach, not just the two-handed weapon.

However, the two-handed longsword continued to be the most popular type in Europe through the 16th century. It saw continued use into the 17th century but began to be supplanted by the rapier.

Below is a table illustrating the basic physical characteristics of a standard longsword:

If you want to know more about the Longsword length, and how it affects its maneuverability and fighting style, you can check our dedicated article about it by clicking this link!

What is a Bastard Sword?

The bastard sword was a late medieval weapon. It was created to fill the gap between the shorter arming sword and the longer true longsword.

However, the bastard sword did not achieve wide adoption until the 16th century. Prior to this time period, most swords were either arming swords (for close combat) or longswords (for distance combat). The bastard sword bridged the gap between these two categories.

The development of the bastard sword was essentially complete by the mid-14th century. Its popularity lasted well into the 16th century. Bastard swords are mostly found in the late Medieval period, but there are some examples of bastard swords in the Renaissance period.

Basically, this sword was a compromise that combined features from both swords. The bastard sword was perfectly balanced for both close and long-range combat. The weapon also featured a sharp point for thrusting. This sword worked well for both slashing and thrusting techniques.

Since it combined the reach of a longsword with the power of a cut-and-thrust sword, the bastard sword became popular among European knights.

The term “bastard” in bastard sword refers to the fact that the weapon is considered a bastard child between two other swords. In this case, the true longsword and the arming sword. Bastard also means “hybrid” in the English language, not the widely-accepted definition of it which is derogatory.

While the bastard sword was originally forged as a hybrid weapon, it eventually became differentiated from both its parents. The bastard sword retained many characteristics of the arming sword, while also having some similarities with the true longsword.

Since it had a fairly typical sword shape, it was ideal for close combat but could also be used effectively at range. Like many medieval weapons, there is quite a bit of controversy surrounding the bastard sword. Some claim that it was an unoriginal design. While others believe that it was one of the most unique and creative sword designs of the medieval period.

Since it was designed to be a more versatile alternative to the longer, heavier longsword, the bastard sword was significantly heavier than the arming sword but considerably lighter than the true longsword. Conversely, its shorter blade length made it easier to carry and use in close quarters than the longsword.

The fact that it was designed to be used with both hands also made it popular among duelists. Due to its wide-ranging uses, the bastard sword was adopted by various armies throughout Europe. It remained in military use until the 19th century. Today, the bastard sword is a relic of the past.

If you want to know how heavy longswords are and the metals used for forging, you can follow this link and you will be redirected to our dedicated article!

Is a Bastard Sword a Longsword?

Joseph Swetnam, a 16th century English fencing master, and an authority when it comes to the classification of swords states that the bastard sword is a sword that’s halfway between an arming sword and a long sword. It can have a flat or a wedge-shaped cross-section.

This definition also seems to align with that of Randall Cotgrave’s (and English lexicographer) describing the bastard sword being a mid-sized sword.

While these definitions provide a starting point for understanding bastard swords, they are not necessarily definitive.

This description is similar to that of a rapier. However, the fact that the blade tapers implies that it is not as long as a true longsword. In short, there is no single, universally accepted definition for the bastard sword.

However, most medieval sword experts agree that the weapon is in between an arming sword and a longsword in terms of length.