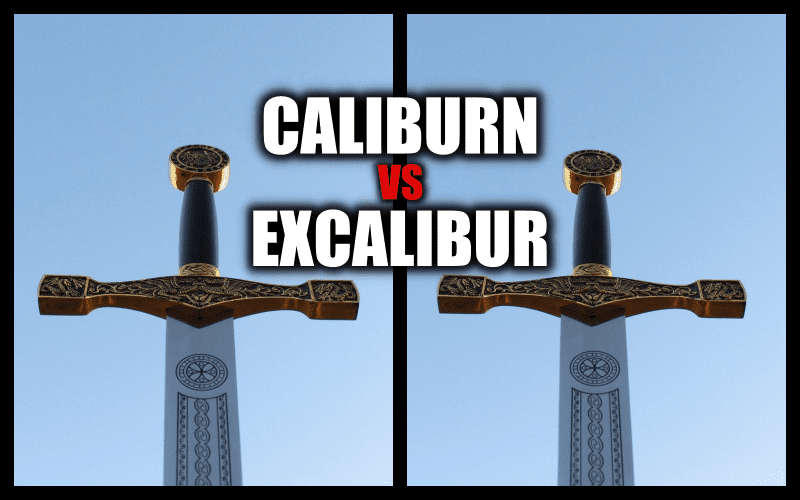 When we talk about the Arthurian legend, the sources are multiple and different from each other.

In the same way, multiples are the legends about King Arthur’s sword. But what about the two swords both apparently wielded by King Arthur: Caliburn and Excalibur?

In this article, you’ll understand that the legendary Excalibur and the famous Caliburn are the same swords, based on the accounts of Arthurian historians and experts.

Is Caliburn Another Name for Excalibur?

Excalibur was originally called Caledfwlch, which can be found in Welsh Arthurian literature. The sword later became known as Caliburn, which would later become known as Excalibur.

This name may have been derived from the Welsh words “caled” (hard) and “bwlch” (a cleft). The Proto-Celtic form of the name is reconstructed as Kaledvwlch. The name eventually became Caledfwlch and then Caladbolg, and its meaning was taken to be “hard cleft” in modern Welsh.

In the Vulgate Cycle, there is a similarly named sword Caliburnus that in most earlier versions of the legend is the original name of Excalibur. Geoffrey of Monmouth first conceived the name Caliburnus in his Historia Regum Britanniae.

The name is derived from the Welsh “caled” (hardened) and possibly the Latin ‘calidus’ (hot). Later writers altered the name to Caliburnus, Latinizing its pronunciation to something like ka-lih-BOOR-nus.

Who Gave the Name Excalibur?

The name Excalibur was the invention of Sir Thomas Malory in the 1470s when he wrote Le Morte d’Arthur. He based the name on the legendary sword of the same name which is first mentioned, as Caliburn, in an early form of the first manuscript of the legend known as the Vulgate Cycle.

Some have speculated that the name was chosen because Caliburnus is a Latinization of the Welsh name “Caledfwlch”, and that the sword of Arthur and Excalibur and the tale of their origin were derived from pre-existing Celtic myths.

The name was never used as a title for the sword before this point. The legendary sword first appeared as Caledfwlch in Welsh mythology.

Simply put, the sword was known by different names at different times. In some versions of the legend it was named Caliburnus, in others, it was named Caladbolg, and in yet other versions it was named Caledfwlch. Hence, we have to go back to the Vulgate Cycle to find an early instance of the name Caliburn being used.

Excalibur is a “modern” name, whereas Caliburn is an ancient one. The only reason Caliburn is not more well-known is because it was not used as a name for the sword until modern times.

Is Excalibur Real? Has It Ever Been Found?

Most scholars believe that the Arthurian legend is largely fictional, although many elements (including characters) may have some references to actual history.

For many years, historians and college professors have debated the historical credibility of the Arthurian Legend.

Was there ever a King Arthur? Was Excalibur a real sword? Where did the Arthurian Legend really come from?

Well…If you want to discover if Excalibur (or Caliburn) has ever been discovered this link will guide you to our dedicated article!

It is said that Excalibur was forged by an Avalonian elf. King Arthur, the legend goes, pulled it from a stone in which it was embedded.

According to the legend of the sword, the wizard Merlin thrust a sword into a rock, vowing that the one who could pull it out would sit upon the throne. The sword had been placed there by Merlin.

In this case, it was Arthur. In the tale, Arthur pulled it from the stone and became King of England. The sword in the stone may have been a ritualistic way of declaring a new leader, or it may have been a test to prove that he was the rightful King.

After it had been pulled out, it was later on stolen by the sister of the elf who forged it. In other versions, it was Arthur’s half-sister. However, it was recovered and was given to King Arthur by the Lady of the Lake in exchange for either the head of Balin or Lady Lile.

Following his victory at Badon Hill, Arthur was given the task of unifying the fractured country. He did so. Arthur was the victor, and he ruled for a while.

The sword was later broken during Arthur’s battle against King Pellinor. King Arthur then wielded Excalibur in many battles, including the Battle of Camlann.

During this battle, Arthur and his knights fought and killed the forces of Mordred and his allies, and Mordred himself mortally wounded Arthur. When Arthur’s kingdom fell, Excalibur was returned to the Lady of the Lake.