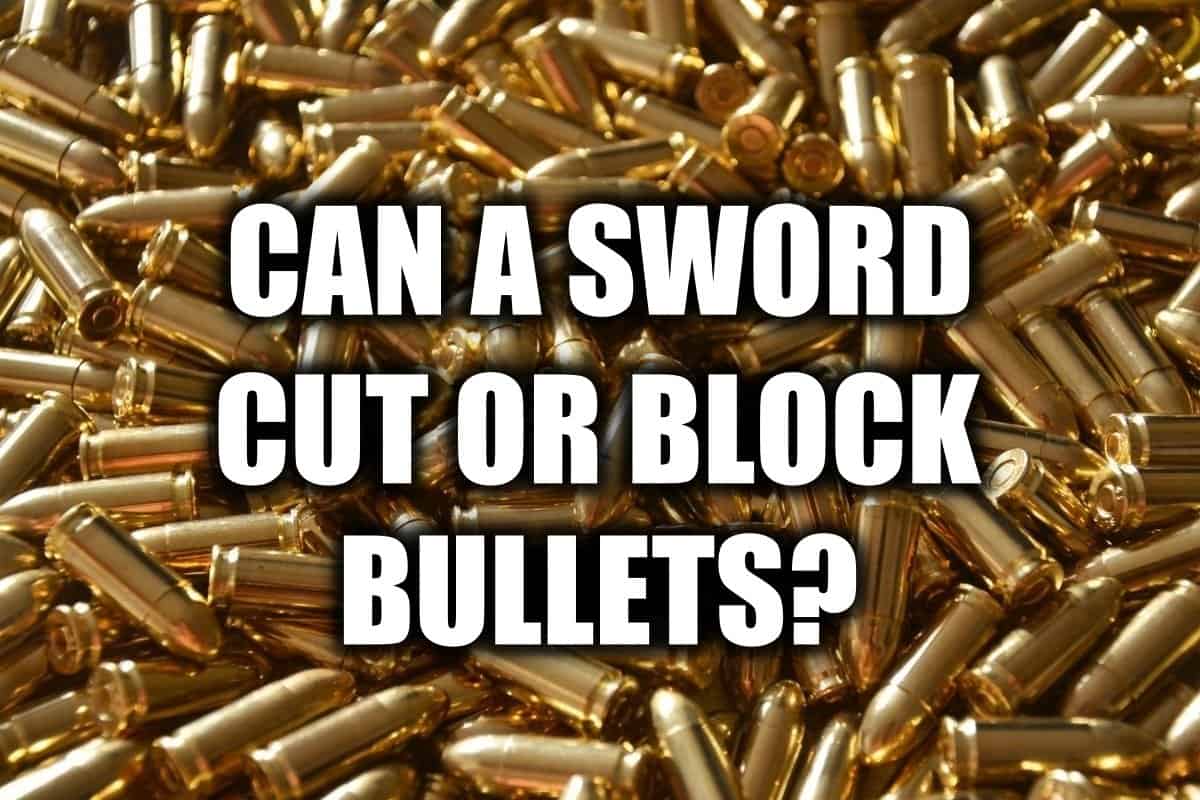 It’s fascinating to see Neo dodging bullets in movies such as the Matrix and Deadpool slicing bullets in mid-air using his katana. But the question is: does an average human have the reaction time to perform such a feat? You might be surprised but the answer is a resounding yes! And can swords really cut or block bullets?

A sword really have the ability to cut or block bullets in some special conditions and environments. It’s critical for the success of such an experiment that the metal from which the sword is forged is strong enough to not be broken by a bullet!

In fact, someone has already done it! But let me categorically state that he could only do it one gunshot at a time as you might be expecting someone with the agility of Deadpool that allowed him to deflect successive gunshots effortlessly.

Can Swords Cut Bullets in Half?

It is possible for a bullet to be cut in half by a sword when the blade is sharp and strong enough to resist the impact.

Bullets do not “bounce” back like a ball, they just keep going in a straight line until they either hit something or run out of “air”. A strong and durable sword, however, is not likely to be “nicked” by a bullet.

When the sharp blade of a sword is plunged into a piece of lead with great velocity (such as a speeding bullet) it will cut clean through the bullet, severing it neatly in two.

In fact, there have been numerous experiments performed when a stationary katana (fastened firmly on a clamp) was able to cut through a bullet.

However, no human has ever attempted to draw a sword on a speeding bullet in an attempt to cut it in half! Didn’t I mention previously that someone has already done it?

Read on to find out more.

The Science Behind Cutting a Bullet in Half with a Sword

The most common bullet in the world is the 9 mm bullet, and it’s 19 mm long. It weighs 9 grams and it has a muzzle velocity on average across different weapon systems of around 350 m/s (meters per second).

Now let’s choose a cutting implement, and for the purposes of this discussion let’s choose the katana. Because of how thin a katana is and how much surface area the edge will be contacting on a bullet (the diameter of the bullet), the surface area that will be coming into contact with the bullet is necessarily going to be less than 9 square mm.

Now, using all these variables, we can plug it into an equation to get a cutting pressure which is good because we can check that cutting pressure against the strength of the common bullet materials to see if they will stand up to said pressure.

So, our equation should be the following: pressure equals to kinetic energy over the distance that energy comes to a stop over the cutting area.

So, using all the variables we have collected, we’ll have a pressure of 3 gigapascals or 3 billion newtons per square meter of surface area. Now, this is higher, ten times higher than the yield strength of common bullet materials like lead or copper. In fact, it’s a third of the pressure needed to form a diamond.

So, even if we’re a little bit off on our numbers here, something like a katana could easily, theoretically speaking, cut a bullet.

Of course, this is all very theoretical. In the real world, things are never quite so simple. For one thing, the edge of a katana will be very sharp, whereas the surface of a bullet will be relatively smooth.

Also, we need to consider the friction between the two surfaces. But anyway, for the purposes of this discussion, the above equation at least shows that the concept is valid. And, it gives us something to shoot for when we start designing weapons and tools that will deal with bullets.

Has Anyone Cut a Bullet in Half with a Sword?

A Japanese swordsman by the name of Isao Machii, however, was successful to hit a bb pellet and cut it in half.

But a bb pellet is not a bullet, for the record.

It’s different when you really have an actual bullet being fired at you and the fear factor that comes along with it.

Bullets are usually made of lead and they have either a pointed or blunt, rounded end. The bullet is designed to penetrate something and then stop.

The bullet itself continues on its path until it hits something and then it starts to tumble.

The bullet will ricochet off the surface and continue on its path just like a rock thrown with enough force would do.

In fact, a bullet fired at a rigid surface will behave exactly like a rock of the same weight. That means that if you are skilled with a sword or other melee weapon and you can draw it quick enough, you could be able to deflect or “cut” a bullet in half.

You may be able to make it once, however, don’t push your luck with successive gunshots, unless you think you’re Deadpool!

Anyway if you are a fan of Deadpool or The Witcher and you are asking yourself if unsheathing a sword from the back makes any sense at all, well…

You can click here to check the related article and solve the mystery yourself!

How Fast Would You Actually Have to Be to Get Your Blade in Front of an Incoming Bullet?

This brings us to the question: are humans capable of anticipating a speeding bullet and is our reaction time in drawing a sword quick enough to bring it to a halt, or even cut a speeding bullet into two? Maybe through intense training this can be possible.

In fact, if someone had trained hard enough, they might be able to use a sword to deflect a bullet long enough to hit the person firing the weapon. However, most people are not trained to do this and even if they were, it is still doubtful they could do it quickly enough to have any kind of real effect. The truth is that bullets are too fast and too deadly for anything.

So, now we have our first piece of the puzzle: you must have a super-humanly fast reaction time to achieve bullet deflection. But, we also know you must be able to react before the bullet even reaches you, which means you must have an equally-superbly fast perception of the incoming threat.

Let’s have an example: let’s say you are 2 meters apart from your enemy pointing a gun to you. Now, when he fires a 9 mm bullet out of his gun, then simple division using muzzle velocity says that from the moment of firing, you would have just 5 milliseconds to respond.

This is where your perceptual acuity comes in. When your eyes take in all that information from your environment, your brain makes an almost instantaneous decision as to whether or not it is a threat. If it is a threat, then your brain sends a signal to your spinal cord which initiates a process that leads to the quick movement of your muscles.

Your neurons send electrical signals along nerve fibers at the speed of light. However, that electrical signal does not reach your muscles instantaneously. It takes approximately 0.15-0.220 of a second or 150-220 milliseconds (150-220 ms) for your neuron to “transmit” that signal down the fiber to your muscle, which then contracts and moves your body in a way that allows you to deflect the incoming threat.

In other words, your ability to perceive and react to an incoming threat is the difference between life and death.

Recently, a study from Cornell University was looking into the fastest reaction times in the animal kingdom and they found that one of the fastest may belong to the humble fruit fly.

They found that a fruit fly’s reaction time is just 5 ms! This is why they’re so agile and hard to hit. In other words, you need to have a fruit fly reaction time to block and slice through a bullet.

That being said, let us assume you have achieved those kinds of reaction times. However, just because you can react to a bullet in 5 ms doesn’t mean you should, because if you do that, then the bullet will be on your opponent before he has a chance to pull the trigger. You see, once the gun is cocked, there is a tiny delay of about 0.5 seconds or 500 miliseconds before the gun is actually ready to fire.

This delay is needed so the gun knows when the trigger is being pulled and can ensure the firing pin makes contact with the primer of the round being fired. In other words, the gun needs a little time to make sure it’s going to fire! But wait! We’ve only got 220 milliseconds to stop that first bullet from hitting you, so how in the world are we going to react fast enough to block all the other bullets that are coming at you from his entire clip?

This is the most likely scenario for any non-trivial slice; that is, the bullet will not just split in half but will instead leave the tip of your sword and continue on its merry way.

Therefore, never ever attempt to do this bullet-slicing experiment unless you are accompanied by a professional.