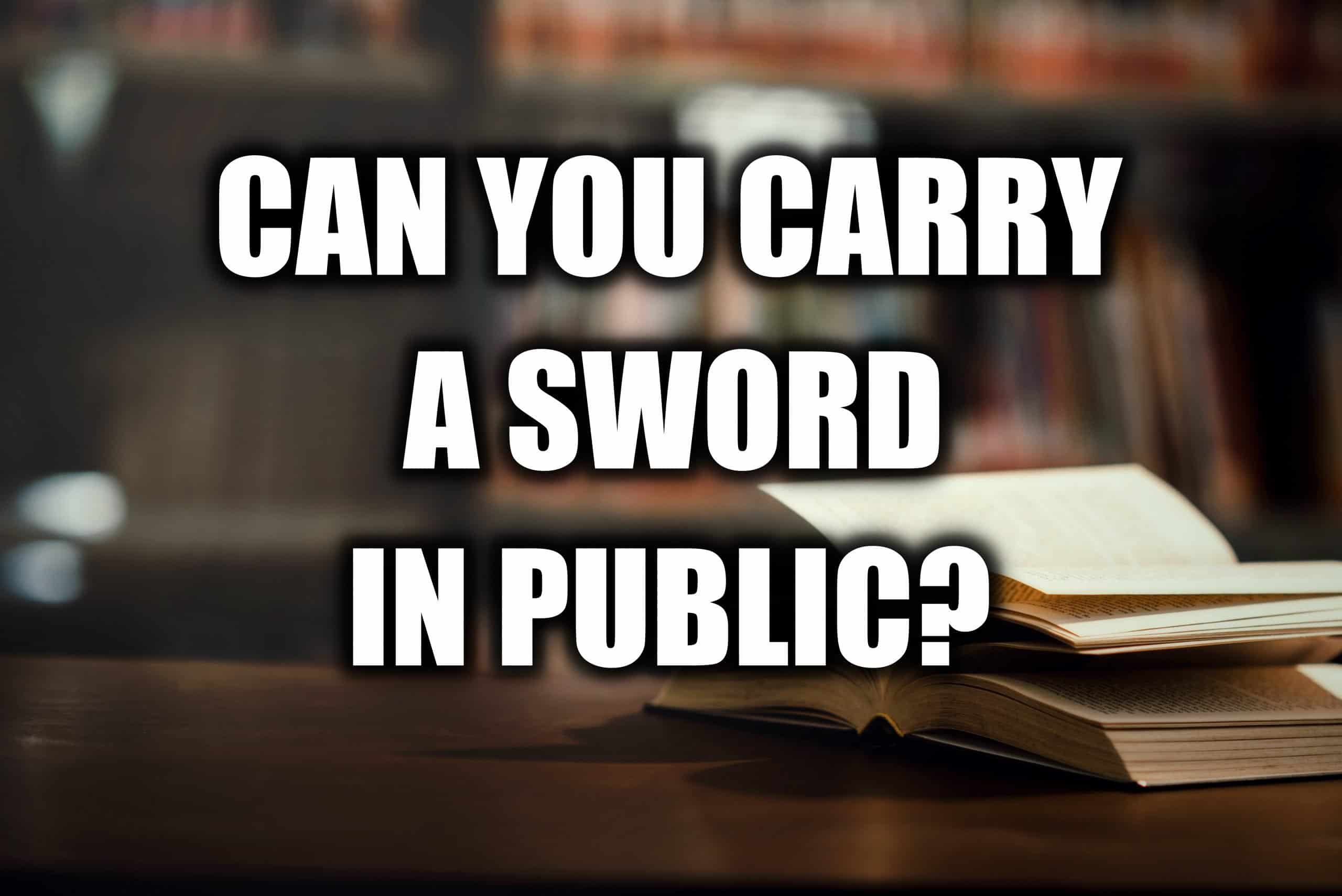 Few American men carry swords..at least, not as many who want to carry guns.

However, if you are fantasizing about wandering around like a sword-wielding medieval knight in shining armor without a care in the world, you’d better make sure you are carrying a valid license to do so or you could find yourself standing before a judge and facing some serious time. But can you legally carry a sword in public?

You can legally carry a sword in public in most states. Some states require that you have a “good reason” for that. But what constitutes a “good reason” varies from state to state. It can be being over 18 years old, for business reasons, self-defense, cosplay, or competition.

If you don’t have a “good reason”, you probably shouldn’t carry one in public. The chances are good that if someone sees you with a sword in public they will assume the worst and they might even call the police. This could get you into serious troubles. For example, carrying a sword in public without a license is illegal in most states and it is considered “unlawful possession of a deadly weapon.” In addition, if someone thinks you are about to use the sword in a threatening manner (especially if you walk around with a naked blade!), they may very well think they need to stop you before you can actually hurt anyone.

This could lead to a fight and, if the fight gets out of hand, to your being arrested. So, make sure you have a “good reason” for carrying a sword before you do so, and don’t carry one in public unless you are willing to take these kinds of risks. If you insist on carrying a sword in public anyway, try to keep it modestly concealed as much as possible by carrying it with its sword bag or sword case so as not to draw attention.

States That Allow Carrying of a Sword in Public

The table below shows which states in the U.S. legalize open carry of bladed weapons such as knives, swords, etc.

How do you Get a Licensing for Sword Carrying in Your State?

That depends on your state and county. Some counties are more lenient than others when it comes to licensing for concealed weapons. But in most cases, you’ll have to go to the state capital or at least to your county seat (city hall) to apply for a license.

And, if you are lucky enough to get one, it will probably be valid for only two years (check with your local government unit). There are four things you must do in order to legally carry a sword in public in any state:

3. Carry the sword openly, in plain sight, in a sheath or scabbard worn on your body. It doesn’t matter where; a jacket lapel, a belt loop, or on your back, are all legal places to carry a sword so long as it is visible and in plain sight.

4. Carry the weapon unloaded and safely locked up in a secured sheath when you are not using it for self-defense. The only time you should ever pull out a sword is when you are actually using it for the defense of yourself or someone else.

Can You Openly Carry a Sword in Canada?

In Canada, a sword is not a prohibited weapon, as long as its sole purpose for being in your possession is to be used as a tool. It’s legal to purchase and carry a sword without having to get permission from the government.

You can legally carry a sword in public in Canada, but not for self-defense purposes.

You can go into any store and buy a sword. Canadian law, however, doesn’t allow you to carry a knife or sword for the purpose of self-defense.

Can You Openly Carry a Sword in Australia?

Australian laws are pretty much lenient when it comes to swords. First, it needs to be pointed out that there is no such thing as openly carrying a “naked” sword in Australia.

In Australia, you can only carry a sword in public if sheathed.

A sword must be sheathed at all times when carried outside the home or place of business. If you are caught carrying a sword without it being sheathed, you could be charged with an offense. So to answer the question: yes, you can openly carry a sword in Australia, as long as it’s sheathed.

Also, make sure that you don’t conceal your sword with any other material aside from its sheath, otherwise, you can be charged with illegal possession of a prohibited weapon and will be required a special permit for carrying it openly in public.

Can You Carry a Sword in Public in UK?

In the UK the context in which this event takes place is the most important thing to consider.

In UK ownership of blades longer than 50cm is generally illegal and can lead up to 4 years in jail unless the blade is an antique, it’s used in a show, or in a historical reenactment.

As in Australia self-defense is not admitted as a valid reason to carry a sword in public.

As you can see, the laws regarding carrying swords in public are not very uniform and the details vary greatly from one jurisdiction to another. Also, there are many nuances concerning the carrying of swords that are completely unknown to most people.