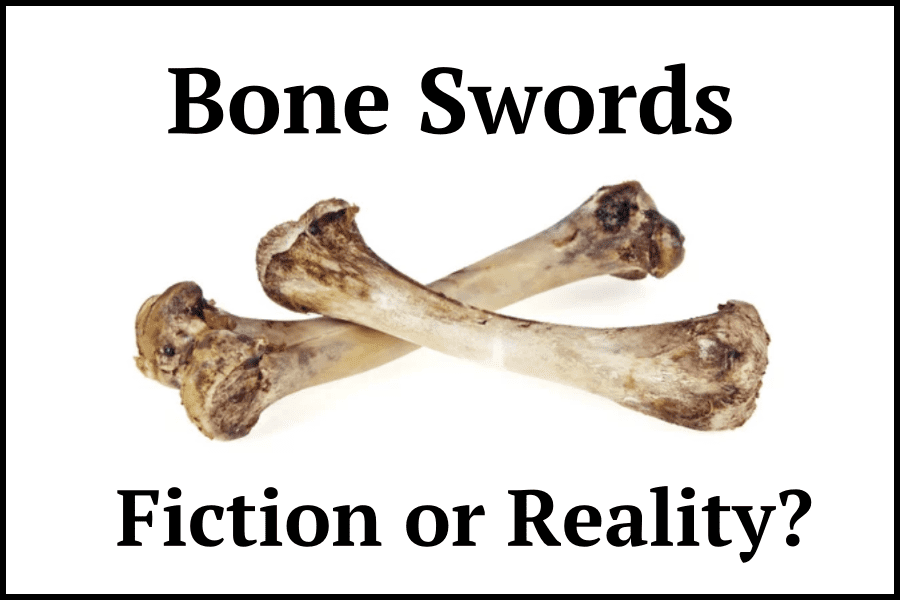 We see oftentimes in movies and video games our heroes hanging around with giant bone swords and deadly daggers made out of some kind of monster bone, ready to use them in battle. But it’s all fiction or you can really make a sword out of bone?

Yes, in real life you can make a sword made out of bone, but it will never be as strong as a steel one. Bone swords and knives were commonly used in prehistorical times, and if you want to make one by yourself at home you just need a good bone, few basic tools, and some spare time!

And now let’s dive into the history of bone swords, let’s try to understand if bone swords are any good in a real battle, and let’s discover how to make one!

Bones as Simple Cutting Tools: Where It All Started

The use of bone in the manufacture of tools was widespread throughout the world in ancient cultures. Bone tools have been excavated from all over the world. The oldest ones were found in Africa, and they are more than 1.5 million years old.

Early humans utilized bones in a variety of ways. Some were used as weapons; others as ornaments, and many were even used as containers for holding water and other liquids. Bones were used for everything from spears and arrows to harpoons and awls. In fact, it is estimated that 70% of all human skeletal remains found in archeological digs are associated with the use of some sort of cutting instrument.

Bones were used by our primitive ancestors back in the day as a raw material for a cutting tool because they were so abundant and easily accessible. In fact, it is believed by some anthropologists that the development of agriculture was in part spurred by our early ancestors’ ability to utilize bone as cutting tools.

How Did Bone Swords Develop?

The development of swords made from bones was precipitated by our ancestor’s need to defend themselves from animal predators and from other groups who were out there as competition for food and territory. In response to this increased need for a weapon, our ancestors created the first bone sword. There was a very simple process to create a bone sword. First, a piece was cut off a bone and a notch was made along the bone to create a blade. Then the blade was attached to a handle. By rubbing the bone against another piece of bone, some of the bone dust would gather on the notch. Since the dust is so fine, it would gather in the notch and form a sharp edge. This is known as hafting.

Definitely an ancient technology. How long did it take for our ancestors to develop this technology? That’s hard to say. One thing is sure, it was an important survival skill that our ancestors utilized and it has continued to be utilized by many people around the world until this very day. I bet you didn’t know that there are still tribes today who make bone swords.

That is all there was to it. The problem with this type of sword is that it was only good for slashing and stabbing. It had no edge whatsoever for paring or slicing. Thus, these early bone swords were not much of a weapon and they were quickly abandoned by most people. However, a small percentage of people who were clever enough to discover how to make these primitive bone swords into something more useful has been credited with the invention of the first true-edged sword. These people were called smiths and they fashioned these swords into something that could be used for both cutting and hacking. These smiths, being the creative and ingenious people that they are, took their knowledge of metallurgy and applied it to the bone. They learned that if they heated the bone in a fire and then plunged it into water it would make the bone stronger.

What Are the Kinds of Bones Used in Making Bone Swords?

The earliest swords were made from the bones of animals such as giraffes and rhinoceros. As time went by, the bones of large animals such as elephants and hippopotamus were used. However, as these animals became scarce, our ancestors turned to the bones of humans. This is because the bones of humans are much stronger than those of animals and are not as likely to break when being used as a cutting tool. Unfortunately, using human bones for making swords was not without its own set of problems. One problem is that the bones of different people have different properties. For example, some people have long bones which are very strong but are also rather flexible while others have short bones which are very strong but are rather inflexible. In general, people with longer bones are stronger than those with shorter bones. Another problem is that the quality of human bone for making swords varies widely from person to person. Some people have excellent bone material while others have bone that is too soft and breaks easily when being used as a cutting tool. All of these factors resulted in the development of many different types of swords made from human bones. Some were single-edged while others had a double-edge.

What Caused the Decline of Bone Swords?

Later on, during the onset of the Iron Age, there was an abrupt decline in the use of human bone for making swords. This was due to several factors. One factor was that our early ancestors no longer had to fend off animal predators and were, therefore, free to devote all their time and energy into other things such as developing civilization. Another factor was that the availability of good quality human bones became limited and therefore expensive. Another factor was the discovery of iron which made it possible to create much stronger and much more versatile swords made from iron.

Improvised Bone Swords: Harder and Stronger Than Ever!

Further, when metal became available as a more efficient cutting tool, many people simply switched over to using metal instead of bone. But not everyone could afford or chose to use metal. So, some clever folks decided to use bone as the cutting tool and then heat treat the bone to make it harder and more resistant to damage. And thus, we have the first true swords made from bone. These primitive bone swords were crudely fashioned by our ancestors with whatever materials they could get their hands on. But over time, these swords were refined and improved until they were much more effective as weapons.

However, despite the fact that swords made from human bones are not as common nowadays as they were back then, they are still around. You can find them in museums and you can even buy one from a sword collector.

How to Make A Bone Sword

Bones can be made malleable with the right technique. First, you need to extract the bone marrow from the bone. The bone marrow is then chemically-treated to remove all traces of organic material. After that, the resulting product is ground into a powder which is then pressed into a mold. The mold is then put into an oven and heated to a very high temperature. As a result, a strong but flexible sword blade is formed. This process is repeated several times until a large number of sword blades are formed. These sword blades are then taken out of the oven one by one and inspected.

So the answer to the question is pretty much obvious. Yes, you can make a sword out of bones!