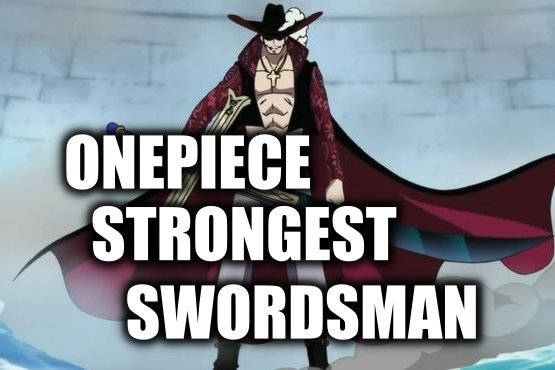 He quickly overcomes Zoro but is inspired by the younger fighter’s calm determination. When Zoro realizes he is completely overpowered, he reveals his chest so that his rival might take his life respectfully. He spared Zoro despite slashing it with his sword and looks forward to when Zoro can overcome him. Meanwhile, he is intrigued by Luffy’s ambition into becoming the Pirate King. So, who is he are we talking about?

Dracule Mihawk is recognized as the “World’s Strongest Swordsman” and holder of Yoru, one of several 12 Saijo O Wazamono grade blades. Throughout the Baratie chapter of the narrative, Mihawk was initially spotted fighting Roronoa Zoro.

Dracule Mihawk is presently deemed as the world’s finest swordsman. He is one of the Seven Warlords of the Sea, a group of pirates that ultimately serve the World Government but do not always obey it. Those on the high seas know him as “Hawk-Eye” Mihawk.

Mihawk saw Shanks as a swordsman competitor when he was young, but when Shanks completely lost his arm, Mihawk quit battling.

Who is Dracule Mihawk?

Mihawk is a tall, slender man with black hair, a trim beard, a mustache, and upward-pointing sideburns. His nickname is derived from his oddly colored red eyes, which mimic those of a hawk. He appears to be a Spanish swordsman, dressed in black and crimson elaborate attire with a crucifix pendant concealing a little knife.

His outfit comprises a wide-brimmed black hat with a giant plume and a long, open black coat with red flower-patterned cuffs and neck with no shirt beneath. In juxtaposition to his leg size, he dresses white slacks with a decorative belt and tucked into too-big boots.

He uses a kogatana, a golden cross-shaped necklace, over his neck and holds his sword Yoru on his back when not in use.

He wears separate trousers and an open white shirt with a ruffled collar in his palace on Kuraigana Island. He had a simple dark robe slung over his shoulders when he met with Zoro outdoors. Just after the time jump, he displays additional wrinkles around his eyes.

He was wearing his regular attire with a black scarf thrown over his shoulders and a broad-brimmed straw hat while reading about the Straw Hats’ exploits on Dressrosa and the resultant new rewards. Mihawk didn’t have his beard, didn’t wear his cap, and his hair was shabbier and shorter at Gol D. Roger’s death twenty-four years in the past. He was already wearing his crucifix pendant and wore a flower-patterned jacket.

He did not appear to be in control of Yoru at the moment, despite the fact that it could not be recognized. Oda depicted the Seven Warlords as children in SBS Volume 63. Mihawk is covered in scrapes and bruises as a result of his training. As a weapon, he wielded a bokken. He was wearing a black open jacket, shoes, shorts, and a light-colored belt.

He is sure of his abilities, but he wants to confront a deserving and formidable rival. He is a firm believer in gallantry and has little patience with stupidity.

Mihawk is secretive and harsh, and he is never seen scared or distressed. He is distant and likes to act on impulse, doing whatever piques his attention at the moment.

Moreover, he adored and appreciated the honesty he saw in both Luffy and Zoro.

Is Mihawk a Bad Guy?

Mihawk is not as evil as most other Seven Warlords members or ex-members, such as Donquixote Doflamingo and Gekko Moriah. He has the title of “Greatest Swordsman in the World” at the moment. Throughout the two-year time jump, Mihawk was Roronoa Zoro’s swordsmanship instructor.

Mihawk was completely unbiased. He wasn’t fighting for good or bad, moral or immoral; he was fighting in his own best interests. Mihawk is also intrigued by the individuals he chooses to assault. He attempted to attack Whitebeard merely to test how far off they were in terms of strength. He also assaulted Luffy in order to see if fate was on Luffy’s side.

Does Dracule Mihawk have Devil Fruit?

Mihawk is amongst the most formidable pirates who have appeared thus far, with tremendous combat skills. So yet, his powers have only been revealed to be based on sheer ability and might.

As a result, Mihawk is one of the few recognized Warlords whose power is entirely derived from innate talents.

Before another storm hit, he fought all but one of Don Krieg’s fleet of 50 ships and 5,000 soldiers alone. Don Krieg blames Mihawk for possessing the power of a Devil Fruit because of his incredible strength.

Despite taking part in the Summit War of Marineford, where so many of the world’s most prominent individuals were injured, he has stayed uninjured throughout the whole series. He was also a competitor of one of the Four Emperors, showcasing his talents even further.

What Race is Dracule Mihawk?

Dracule Mihawk is a talented One Piece combatant. He is a Shichibukai and one of the most formidable swordsmen in the world.

Does Dracule Mihawk Have a Crew?

Dracule Mihawk is a pirate, although he isn’t accompanied by a crew. As a result, he is one of the very few nine pirates in the narrative who do not have their very own unit.

Mihawk is one of only two persons without a crew among the previous Shichibukai who were operational until. Lately, the other being Edward Weevil, the group’s final recruit before it was terminated.

Now that we know for sure who the best swordsman in One Piece is, let’s have a look at this video to see just how powerful he is as a swordsman.