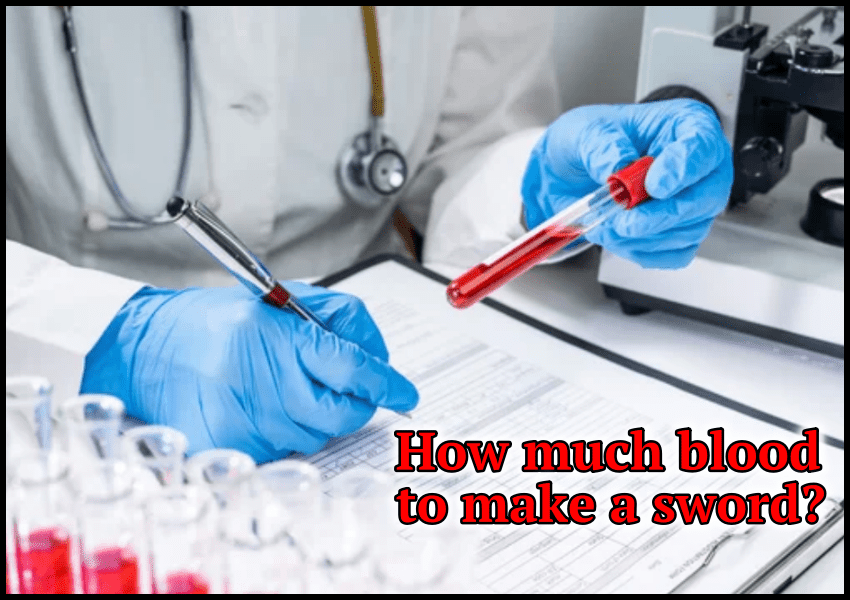 One of the most exciting questions that have baffled sword enthusiasts for centuries and until now is this: was there ever a sword made purely from the iron contained in human blood? Perhaps, if such a sword really exists, the minimum bid in an auction for such a sword is half a billion dollars. Who knows? Probably a billion, or more.

But how much blood do you really need to make a sword? To forge a typical British Longsword of 1.45kg made out of pure iron it would take nearly 2196 liters of human blood that equals to the blood you can find in almost 360 adults ( an adult has a total of around 4 grams of iron in his blood).

The Science Behind Blood Sword: Is It Possible?

Is it possible to forge a sword using blood? Theoretically, it would be possible, but it is not something that can be easily done. Here’s why: Usually, the average adult’s blood has around 4g of iron. On average, it’s said that a typical British longsword weighs around 1.45 kg. The carbon content of steel is typically close to 1%. Wikipedia claims the range of carbon content in steel ranges from about .002% up to 2.1%. To put things into perspective, the most common percentage for carbon in steel is 1.051%. Thus, 1.45 kilograms – (1.45 kilograms * 1.05 percent) = 1.4347605 kilograms of iron in the average longsword. If you had enough time, it would have taken 358 or 359 men to produce the necessary amount of iron for a single sword if their entire bodies were used as source material for iron.

In other words, if you were to cut out every square inch of all those dead men’s skin and muscles and then melt these raw materials down into iron, it wouldn’t even equal one-tenth of the weight of the final product needed to make a single good quality sword. What this means is, if you are going to forge a sword using blood, you must use some other source of iron besides human blood. In fact, if you are going to do this at all, you should probably use something other than blood – at least as far as the forging of the blade is concerned. The reason for this is, once you have forged the blade, if you then heat treat and quench the steel, you have to make sure you have enough carbon content in the steel to give you a strong and hardened sword. Thus, the least you can do to make it appear that you have a sword made out of blood is sort of like putting a coat of varnish on a table that has already been painted.

Making A Sword Out of Blood: Putting Theory into Practice

Even if you could somehow make a sword from blood, it would be extremely brittle and would break easily. But what if you could somehow use blood to “activate” the steel? Well, that would theoretically make the steel 50 times stronger! This is pure fantasy and has no scientific basis whatsoever. However, it does serve to illustrate how much people love to over-inflate simple ideas into something they’re not.

Unquestionably, though, a real blacksmith could forge a sword from blood. But, of course, he would have to have access to an unlimited supply of it. What if you only had a small amount of blood available? Would it still be possible to forge a sword? The answer is yes, but you would have to use what little blood you have in combination with other substances. Here’s how it would work: First, you would have to mix the blood with some sort of non-toxic cement or glue. This would be the “filler” that would give your weapon substance and make it more likely to last. Next, you would need some sort of metal which could be shaped into a sword. This would be the “carrier” that would contain your filler. And finally, you would need some sort of “activator.” An activator is something that when added to your mixture, causes it to become malleable and easy to shape.

So, let’s say we have managed to extract all the iron from a human’s blood. OK, now what? How do we use that iron to make a sword? Well, here’s how the real thing is done: First, you heat up the iron until it becomes white-hot. Then, you plunge it into water – which has a low-pH content because it is mostly made up of hydrogen atoms – until the iron is completely submerged. At this point, the iron has been “softened” by the hydrogen in the water. Next, you remove the iron from the water and give it a sharp edge. Then, you start hammering away with a steel anvil on one side and a hard rock (or similar material) on the other. The pounding action “hollows out” the iron like a lathe and removes most of the iron from the outside.

As I have noted before, most of the iron is now inside the sword and it is now ready to be hardened again. The hardened iron is heated to a very high temperature until it turns red-hot. At this point, it is plunged into water which has been acidified with phosphoric acid until the iron is completely covered with a thick sludge. This is repeated several times. The acid in the water chemically bonds to the outer surface of the iron and makes it very hard and corrosion-resistant. It is then heated until it becomes white-hot. At this point, it is hammered away as before. After several such hammering actions, only the very center of the iron remains soft. This is then hammered away until only the very hardest substance remains – pure iron. Pure iron is then shaped into a sword or other item using traditional metalworking techniques. This process of acid-hardening and hammering is very time-consuming and difficult to do properly. However, this is how swords are really made today.

How Did Someone Come Up with The Idea of Making A Sword Out of Blood?

Actually, no one really knows if such a sword exists. No existing literature, both historical and empirical, can ever claim with utmost certainty that such a weapon exists. We probably have heard stories passed down through word of mouth from one generation to another but no substantial evidence can justify its existence. Further, when someone comes up with an idea that’s both unusual and impractical, people will always remember it and tell their grandchildren that this was the “first time anyone ever did such-and-such.” This is especially true if the grandchildren then feel a sense of awe and superiority because they “knew” this was impossible. Hence, the story of how a sword was forged using blood has been retold and retold over and over through the centuries. And, of course, each retelling gets more embellished and exaggerated. One thing all these stories have in common is they are almost invariably false. However, they do serve to illustrate the lengths people will go to in an attempt to prove an idea is true.

Forging with blood is an interesting idea, but one that should be left to fiction writers and swordsmiths who are looking for an excuse to explain why their swords are so much more superior than everyone else’s.