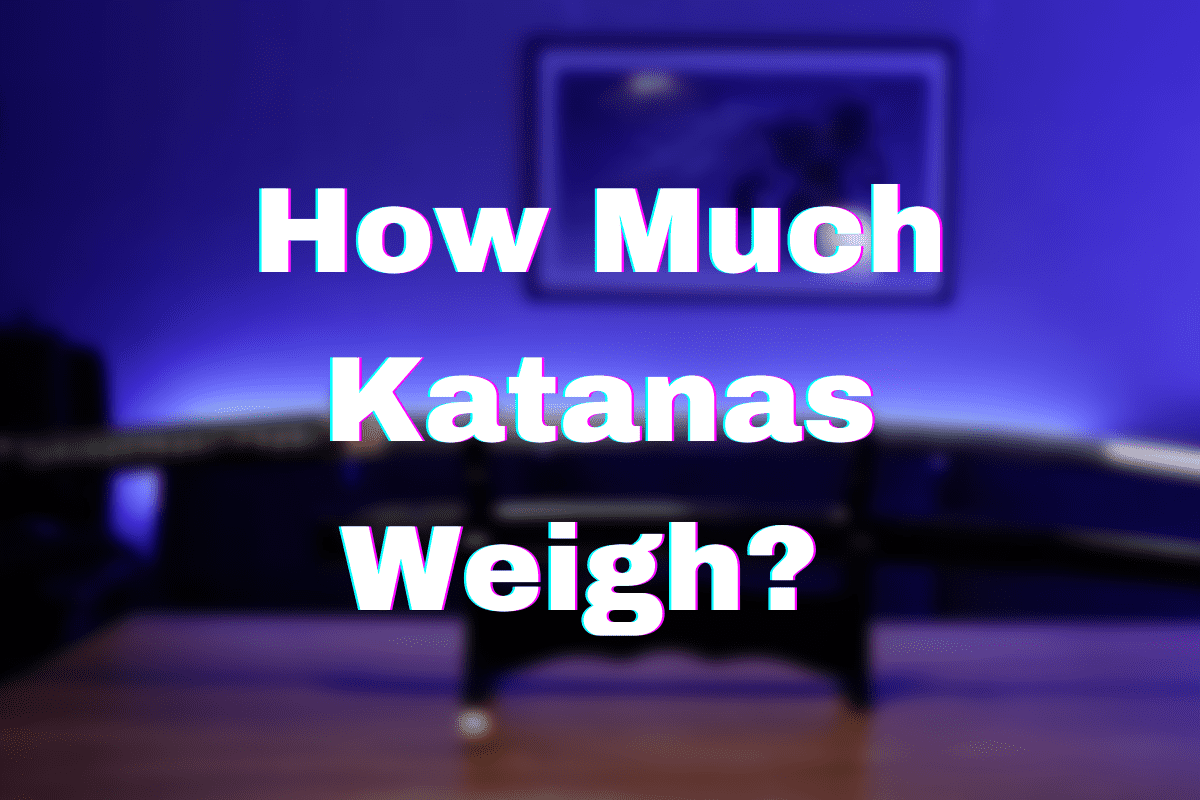 Most people think of the katana as an extremely light and razor-sharp blade because of the way it’s portrayed in pop culture, particularly in manga, anime, and even Hollywood. But is the Japanese blade really that light? Or durable, for that matter? More importantly, are these swords similar to each other in terms of weight?

Some sword collectors might give you a certain weight range that does not go beyond the 2.2-lb (or 1-kilogram) mark. Unfortunately, they could be referring to the modern types, which are lighter and shorter, and that does not take you closer to the truth.

What’s the Average Weight of a Traditional Katana?

Without the inclusion of the saya or sheath, the average weight of the katana would be around 2.65 lbs (1.2 kilograms). The sheath would weigh somewhere around 100 to 200 grams, give or take. Thus, we’re looking somewhere around 1.4 kilograms tops.

Apparently, all katanas do not weigh the same though. That’s because of the different methods involved in the production of these swords. Generally, a katana could weigh anywhere from 2 to 3.1 lbs (0.9 to 1.4 kilograms).

The considerable weight inconsistency among katanas can be somewhat confusing, especially for someone who’s planning to start a katana collection. For that matter, you’ll be wise to know the different factors that affect the weight of the blade which are as follows:

What Are the 4 Main Factors that Affect the Weight of a Katana?

There are a handful of factors that can affect the overall weight of the Japanese blade. While the size of the sword plays a crucial role in this matter, the type of materials used is a key determinant with respect to the katana’s mass. The factors that should be considered in regards to the katana’s weight are as follows:

The blade of a katana is made from tamahagane — the type of steel used by traditional bladesmiths. Tamahagane steel is heavy because this material is made from iron sand mixed with rice stalks, which is where the metal’s carbon content comes from.

Shinsaku or modern katanas are lighter than their traditional counterparts because they are made from durable yet lighter steel alloy. Magnesium and aluminum are two of the commonly used alloys found in modern Japanese swords. Today’s bladesmiths use these types of steel alloys because they are highly resistant against breakage and can withstand a lot of stress.

It does not take a veteran sword collector — or a genius for that matter — to realize that length can have an effect on a katana’s weight. A considerable amount of tamahagane steel used in the production process would, of course, result in a longer katana. In fact, apart from the types of steel used, traditional katanas tend to be heavier than modern ones because they’re longer.

This feature shares a similar concept to that of the katana’s length since they both have something to do with the physical aspect of the sword. The use of modern steel alloy in shinsaku katanas has led to thinner blades, making them lighter as a result. Meanwhile, traditional samurai blades have to be wider because this adds to the sword’s toughness, which makes it more resistant against breakage.

A longer tsuka, say, 12 to 13 inches, will make the blade a bit heavier, as compared to one that’s only 9 or 10 inches long. Most beautifully decorated tsuka are often heavy because the handles do not use the standard stingray wrappings and copper blade collars. Instead, they use silver or other precious metals.

In addition, the tsuba, which is mainly made of iron or brass, can weigh anywhere between 70 and 200 grams, depending on the size and shape. Though small, there’s no doubt you’d definitely feel the weight difference between a sword that has a lighter tsuba as compared to one that’s on the heavier side.

Bo-Hi or No-Hi: Does the Blood Groove Affect the Katana’s Weight?

Some Japanese swords have that singular ridge that runs along the edge of the spine. This design is referred to as the blood groove is actually called a hi or bo’hi. It was thought that the groove enabled blood to pass through it, preventing the sword from getting stuck into the flesh, thus the term.

However, contrary to popular belief, the bo-hi helps lighten the katana. This method is performed by carving off a small amount of steel from the blade, which results in that straight, uniform line along the surface of the sword near the spine. This technique could compromise the sword’s toughness though. Nevertheless, since the balance would have shifted closer to the hilt, the blade becomes easier to wield and with greater chance of recovery after every swing.

Swords Larger than the Katana: How Much Do They Weigh?

Apart from the katana, the samurai used larger swords both in battles and duels. Among these were the tachi, nodachi or odachi, and nagamaki. But how do these swords differ from the katana in relation to the weight difference? Also, how were these weapons used against a warrior wielding a katana?

According to historical texts, the tachi came into existence in the 900 AD, thus preceding the katana which appeared in the 12th century during the Kamakura Period. With a blade length that ranges from 60 to 80 centimetres (23.6 to 31.4 inches), the tachi has a weight that’s anywhere from 2.4 to 3.3 lbs (1.1 to 1.5 kilograms).

Because of its size, the tachi became the ideal sword of the cavalry. Its length allowed horse-mounted warriors to strike at foot soldiers without having to lean toward them. Also, the blade’s curvature was designed to slash at a combatant with ease. Though somewhat similar in appearance, the tachi differed from the katana from the way it was worn. The samurai wore the tachi with the edge facing down, as opposed to the katana in which the blade should be facing up.

Similar to the tachi, the nodachi was used as a cavalry sword. Surprisingly, there are historical records that state the odachi was also used by foot soldiers when engaging horse-mounted warriors. Given its size and reach advantage, there’s no doubt the odachi could have been a great deal of damage against the cavalry.

A nagamaki is like a katana but with a hilt that is as long as the blade itself. Overall, the entire weapon has a total length of 200 centimetres (78.7 inches), and the blade weighs somewhere around 8 lbs (3.6 kilograms). Because of its sheer size and weight, the wielder would have used the nagamaki the way they would have an odachi — in larger, sweeping strokes. For that matter, the nagamaki makes an excellent weapon against soldiers on horseback and, perhaps, even against the horses.

Considering the different methods employed when producing a katana, it’s not surprising that the weight of the blade differs significantly, depending on the process. Typically weighing from 2 to 3.1 lbs (0.9 to 1.4 kilograms), the katana’s overall weight significantly increases with the inclusion of the sheath, which could be anywhere between 100 and 200 grams.