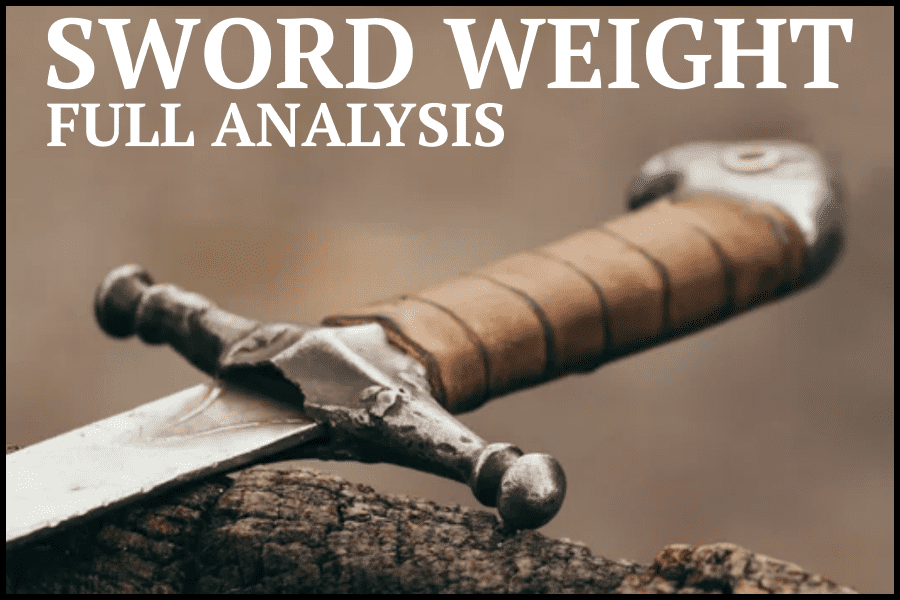 Whenever I watch movies such as the Gladiator or Braveheart or any movie that is heavily-themed with swords I can’t help but imagine the pain and agony of someone getting stabbed or hit by a sword (or worse, beheaded) or imagine the wielder himself and at the same time being awestruck at the physics of maneuvering a sword. I know it sounds morbid but you have to admit that you do the same too!  In fact, my imagination entertains me more than the movie itself (but that’s after watching the movie!). But how much do swords really weigh?

Swords can weigh from 1lb (0,45kg) of aColichemarde sword up to 7.5lbs (3.4 kgs) of a Zweihänder. The average weight for a sword of 70 cm is about 2 pounds (0.9kg). Every sword have its pros and cons: for example the lightest the sword, the fastest you can hit your opponent.

But what really determines a particular sword weight? A sword weight is determined by numerous factors: the kind of metal used when forging, length of the blade, width of the blade material used for the grip. Today, we’ll go straight to the facts and with a little help from our imagination here of course to see how these types of swords really perform in the battleground. No CGI this time around!

A sword’s weight varies greatly depending on the type of sword, its quality, and how it was crafted. The weight of a sword is an important consideration for two reasons. The first is obviously the ease of wielding the weapon. A heavier sword is more fatiguing to hold up for extended periods of time. A sword that weighs more than 5 lbs. is considered heavy, and anything in between is considered medium weight while a sword that weighs less than 3 lbs. is considered ultra-light. This is based on the weight of the sword blade itself. It is not based on the weight of the sword, as that includes the hilt and scabbard as well.

In the past, most swords were medium weight. Those that were ultra-light and heavy weight were special purpose weapons and not used as often as the medium weight swords. A sword that weighs less than 3 lbs. will be very fast on the recovery and on the offense. A medium-weight sword is one that weighs between 3 lbs. and 4 lbs. Lighter swords are generally easier to use, while heavier swords are generally more damaging. Heavy swords are better at dealing out damage, while lighter swords are better at avoiding receiving damage.

Ultra-light sword styles tend to focus more on quick, efficient cuts that utilize the momentum of the sword and limbs of the body to power the cut, and which attack the weak points and joints of the body and rely on the weight of the weapon and the speed of the attack to keep the opponent off balance. These types of swords are great for sport fencing or for use as a self-defense weapon. They are also great weapons to have in an “emergency kit” for home defense, since they are easy to conceal and transport. On the other hand, heavy swords are designed to deliver massive damage by brute force. These types of swords have more weight in them so they will penetrate and stay in an opponent’s skin and bone. When used by a skilled swordsman, a heavy sword will almost always win a match.

Here below you can find a useful table that contains all major sword types, age of construction and the respective weight both in lbs and in kgs.The weight categories are as follows: Light, Ultra-light, Medium, and Heavy. The weight of a weapon also determines how much damage it does. Datas has been carefully revised, after searching in numerous international museum archives.

If you are also interested in modern day fencing, in this table you will find all the swords fighting disciplines, with the respective sword maximum admissible weight:

The Heaviest sword ever used in battle:

The heaviest sword ever made that have been actually used in a battlefield has been the double-edged sword held in combat by Baba Deep Singh Ji during the 18th century in India. His sword has been recorded to have the astounding weight of 32 lbs (15+kgs)!

The Physics Behind Maneuvering A Sword: Speed and Damage

In terms of swing speed, the general rule of thumb is that a sword that weighs less than 3 lbs. is a quick-swinging weapon, a sword in the 3-4 lbs. range is a mid-speed, and anything above it is a slower-swinging weapon. The weight is a factor when it comes to speed, but it’s also a major factor in the damage caused. If the sword is too heavy it hurts the elbow and shoulder, and if it is too light, it feels like it is going to bounce off the target and the cut is not as clean (unless it is a very sharp sword).

In addition, a properly weighted sword will have just the right amount of “give” or “resistance” that allows the user to make a truly clean and effective cut. In general, you should try to achieve a medium-weight sword. If you are a beginner, this probably means a sword that weighs between 3 and 4 lbs. If you are more advanced, you may want to consider an ultra-light or even a heavy sword. Just keep in mind that a heavy sword will feel more substantial in your hand and it will give you more “oomph” when making a cutting motion.

The mass of the sword is not necessarily an indication of how well it will cut (there are some very heavy swords that are very well-designed), but it is an indication of how it will feel when cutting. The best swords for cutting are middle of the road in terms of mass.

The concept of weight has more to do with how the sword feels than anything else, but this is also related to blade length. A long, heavy blade will feel heavier than a short, heavy blade even if they weigh the same. Please keep in mind that this scale is highly subjective. What one person considers ultra-light may be considered medium weight by another, and vice versa. At the end of the day, it is all about comfort.

How to Determine the Sword’s Stability and Balance

The next step is to determine if the sword is balanced. A sword is balanced when it is able to be held at any point along its length and remain in either a vertical or horizontal position without any noticeable tendency to tip. What is the balance point of the sword? A sword that is 3 lbs. or less is considered very light, and it is usually held with one hand, giving it a balance point that is near the hilt.

Undeniably, the most common weight for a single-edged sword, and it is usually held with both hands, giving it a balance point that is near the middle of the blade. Medium swords, those that weigh from 3 to 4 lbs., are used by most people when they fight. They are held in either a two-handed grip or in a more traditional one-handed grip (like that of a rapier). The balance point of a medium sword is typically found anywhere between the hilt and the cross-guard.

This means that a sword of this weight will have a little more power behind its swing than a light sword, but not as much as a heavy sword. The heaviest swords, those that weigh over 6 lbs., are used only by experts. They are held with both hands far forward on the hilt, giving the swordsman a very strong balance point that is located near the tip of the blade. These swords are sometimes called “breaker” swords because they are used to quickly separate an opponent’s defenses, and then the more powerful swordsman uses a lighter sword to finish the job. As long as the sword is balanced for the weight, you are good to go. The weapon’s total weight is not all that matters. For example, the falchion is a deadly weapon, but it weighs only a pound.

Now thanks to this article you have all the informations needed in order to classify all the types of sword by their weight. Swords are divided by weight in three types: light, medium and heavy, the heavier the sword the stronger the hit but the lower the maneuverability and the amount of hits in a battle!