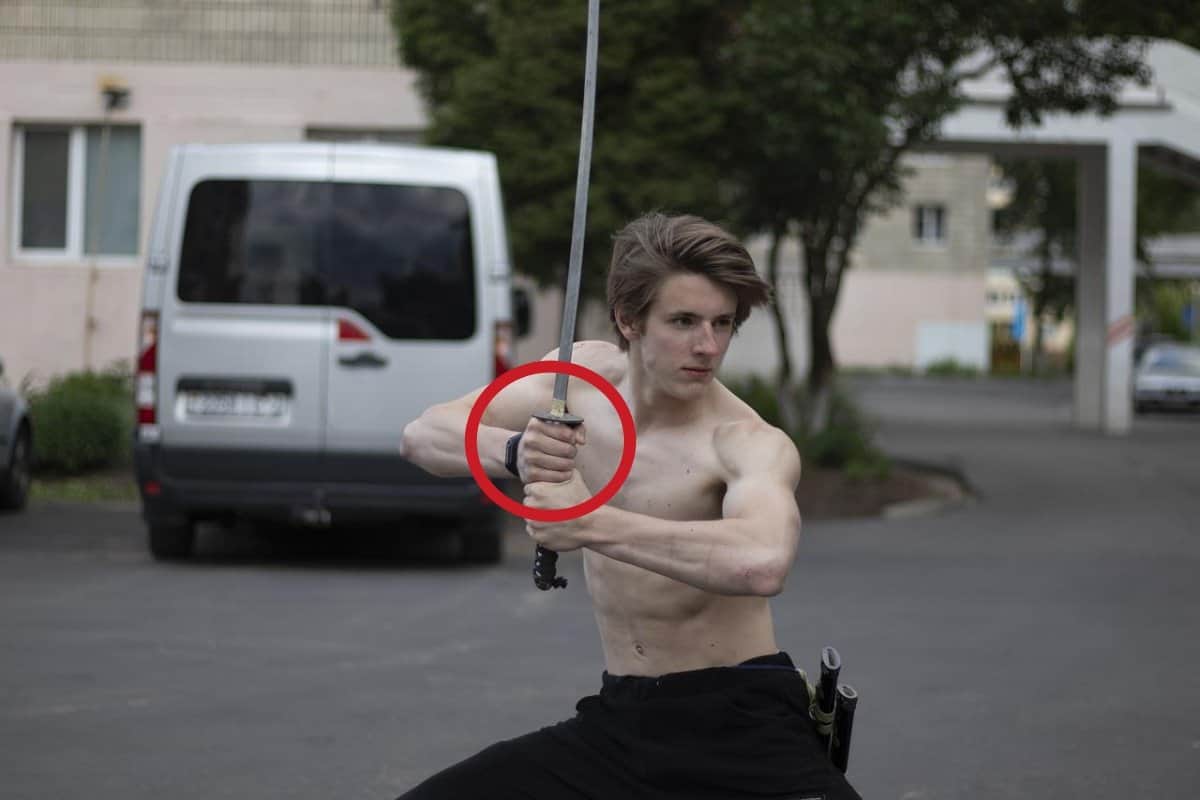 Now that you have received your 80-centimetre long, folded, clay-tempered, tamahagane-steel katana with elegant koshirae, it looks like you are ready to do some badass tameshigiri. Before you proceed though, it’s best that you consider a few things, like prepping the goza targets, and, most importantly, the basics on how to hold a katana.

If there’s anything that you should know about the katana, it’s that self-inflicted injuries are common. These accidents happen among those who do not perform proper handling procedures. Safety goes a long way, especially to someone whose hobby has anything to do with extremely sharp stuff. And collecting katanas is no exception.

There are instances in which sword collectors can resist the temptation of taking their swords outside for a swing, especially if it’s a custom-made blade made of badass carbon steel or the likes. For that matter, it’s ideal that you have some knowledge on how to handle a sword properly. And in this case, we’re talking about the katana. So unless you are a kendoka or one who is proficient in iaido or battojutsu, you might as well take some time in knowing how to hold a katana like a professional.

4 Easy Steps on How to Hold a Katana

As the saying goes: form follows function. For that matter, the way the tsuka (handle) is designed, including the blade of the katana itself, there is a specific rule in the way you should hold it.

If you consider the katana’s features you would instantly think that there is a certain way of handling it. For that matter, you should handle a katana by following these steps:

Why Should I Hold the Katana in This Manner?

This method would allow you to swing the katana effectively because the right hand helps maintain the angle, while the left hand provides the motion of the blade. Additionally, your stance should be narrow, so the feet are aligned with the shoulder.

The right foot should be positioned one step forward, and the weight of your body distributed evenly. While there are several positions known to kendo, this posture, otherwise known as chudan-no-kamae or middle-level posture, is a basic stance in kendo.

Can You Switch the Left Hand With the Right?

If you are an iaido or kenjutsu practitioner, you cannot switch the position of your hands when holding the katana. All the sword techniques known to kenjutsu and iaido are all right-handed. That is because all samurais are right-handed. Even if a samurai was left-hand dominant, they would teach themselves to use the right hand when training with the katana.

This is the reason why, especially for iaido practitioners, the katana is tucked on the left side of the obi or belt. they can draw the blade from the sheath in a single sweep with their right hand. Placing the sheathed katana on the left would require a long time before a samurai could draw their sword. For this reason, the samurai would put the katana to their right as a sign of nonhostility toward another individual.

Assuming that you are not practicing kenjutsu or iaido for that matter, you are definitely exempted from this rule. Since these martial artists observe the traditional way of how the samurai used the katana, they are bound to the rules observed by Japan’s elite warriors during that period.

Now that we have touched the topic, it might do you some good to know more about tameshigiri. Tameshigiri is an ancient Japanese practice of testing the edge of a katana by cutting. The samurai practised tameshigiri to determine the sharpness of their blades. For kenjutsu and iaido practitioners, tameshigiri is performed using rolled tatami mats called gozen targets. Sometimes, bamboo can be used as a test target for tameshigiri.

The goal in tameshigiri is to slice the gozen cleanly and perfectly. With this, katana practitioners are able to hone their skills and learn how to deliver an effective strike. There are several styles and techniques when performing tameshigiri (sword test-cutting). For iaido or kenjutsu practitioners, this takes months of practice. They have to master several cutting patterns, each grouped according to the level of difficulty.

What Materials Can Be Used for Tameshigiri?

So you have run out of water bottles to cut with your katana? You can switch to rolled tatami mats. A new tatami mat costs anywhere between $15 to $20 apiece. Discarded or used tatami mats may be recycled for this purpose. However, if you wish to use targets that are also recommended by kenjutsu or iaido schools, you may also use any of the following items as long as they are available:

Final Word—How to Hold a Katana Like a Pro?

Interestingly, holding a katana is not as simple as holding a baseball bat. Instead, there are a set of guidelines that have to be followed in order to strike and cut effectively with it. Iaido and kenjutsu practitioners perform those steps because they adhere to the way the samurai handled the katana. In other words, handling a katana can be a challenge especially if you are not used to holding a sword in that manner. Nevertheless, with practice and proper training, you can master the basic rule of holding a katana in no time.

Continue Reading
link to How to Become a True Samurai? A Beginner Guide

Cowboys and indians. Cops and robbers. These pretend games are just some of the activities that we love to play as children.  However, now that you’ve grown and have become a serious sword...