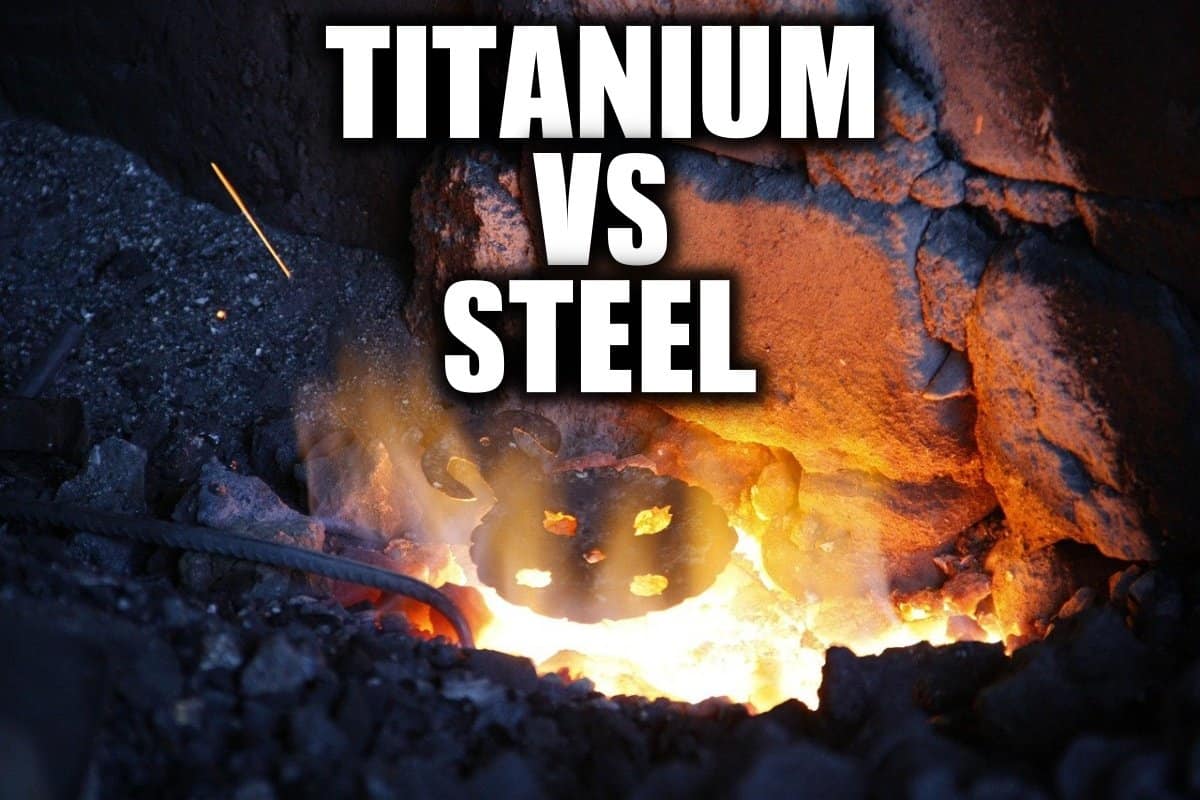 Every fan of swords has thought at least once about how would be to wield a sword made out of titanium, but is a titanium sword really better than a steel sword?

A titanium sword is far worse than a steel one. Due to the features of titanium, a sword made out of this metal would be weaker against our target, far less elastic and it would be nearly impossible to be sharpened. We have also to take into consideration the extreme rarity of this metal.

It’s a bad idea to use titanium for swords or any blades. Steel is the better choice. Titanium can’t be heat treated to gain a good edge because it won’t retain it. Titanium is light and strong for its weight, but it is not stronger than steel, it is just lighter.

Let’s start with a useful table that will explain to you the main differences between the two metals.

Reasons Why Steel is Better Than Titanium

We can already understand from this table that steel has far more advantages than titanium when intended to forge a sword. But now let’s break down all the reasons why steel is better than titanium.

Firstly, in the defensive aspect of sword engagement, the lighter titanium sword could be easily knocked aside or defeated, which would lead to an injured user.

Also, the lighter titanium sword does not have the heft to make it a really solid feel in the hands of the user; it is lighter and thinner than the steel sword, which makes it less effective in both offensive and defensive sword engagements.

The second aspect is that of offense, specifically for the sword specializing in cutting, where having a large mass is a benefit because it allows a stronger impact into the opponent.

If it’s the right sword for your intended purpose, a light sword is a good choice. But keep in mind that if it’s not the right weight for you, it may not be enough for what you intend to do.

Again, if you’re looking at a sword for a different purpose than cutting, then you may find a heavier sword more suitable. Titanium is actually a very strong material, but it doesn’t retain an edge as well as steel. You can heat treat titanium to get an edge, but it will eventually dull.

It’s also not as easy to work with as steel. Steel swords are generally easier to use than titanium swords.

Titanium swords can be too light for some people. Steel swords are heavier but tend to be stronger. Steel swords have more mass which makes them harder to knock away and they are better at delivering a stronger impact.

Further, titanium is more difficult to forge than steel and is more brittle, so a sword made from titanium wouldn’t last long in battle.

Titanium is incredibly hard, and for that reason, it has a disadvantage in terms of its ability to withstand heat. If you’re going to make a sword from it, you’ll have a difficult time.

For those who need a sword but don’t want the weight of steel, this is a good option. It’s also 45% lighter than steel, so you can have your blade without the weight to do any damage.

Titanium is generally more expensive than steel, but it’s a stronger material, pound-for-pound. Titanium is used for many products because of its high strength, toughness, corrosion resistance, lightness, and low density, but it’s not as good at resisting compression and cutting forces as steel.

When it comes to weight, titanium is far less dense than steel, so a physically similar volume of titanium will weigh much less than the same volume of steel. But that’s not to say that titanium is stronger.

The idea that “titanium is stronger than steel” is a common misconception, expressed in science fiction and other literature. It’s not based on an understanding of the materials involved in real-life applications.

Of course, using titanium rather than steel to make swords makes no sense at all because the difference between the two metals is totally meaningless when it comes to how a sword is made and wielded.

In theory, titanium is harder than steel, but in practice, a sword made of titanium would be too brittle to make it useful for any purpose. While titanium isn’t as good for a sword as steel is, there are far more issues with using titanium for swords than you might think.

It’s true that the best blades will still have different qualities in a single blade. They may use different types of steel and alloys, for instance, to make it stronger in some parts of the blade, and softer in others.

There’s no weight advantage for titanium over other materials, but there are already swords made from steel that are much lighter than they should be. That’s not the kind of thing that would improve with the addition of a few more ounces of titanium.

The moment when you are not able to move your hand faster than a sword in it, the sword is too light. A sword needs a certain amount of weight to be effective in cutting and thrusting effectively.

If it’s too heavy, you’ll find it difficult to move your sword quickly, and if it’s too light, you won’t be able to deliver a strong enough blow.

Iron is usually combined with carbon in the steel, but it may be combined with many other elements, too, such as chromium, nickel, manganese, molybdenum, and copper.

Every single type of element is an important component of a strong steel structure. Ductility, in this context, means that the material is strong enough to maintain its shape, even under high stress.

The only problem with titanium is that it’s very brittle, and it can break easily.

You won’t find an element that will outperform steel as a sword, and steel is better at handling shock than titanium. Steel is also stronger than titanium at room temperature, so you can’t expect it to crack if it hits something hard.

Because titanium is hard and lightweight, it may not be the best choice for this purpose. However, by combining it with other elements, it may be possible to create an alloy that would be a better choice for this application.

Meanwhile, titanium alloys can be made from a variety of metals and elements that make them even stronger.