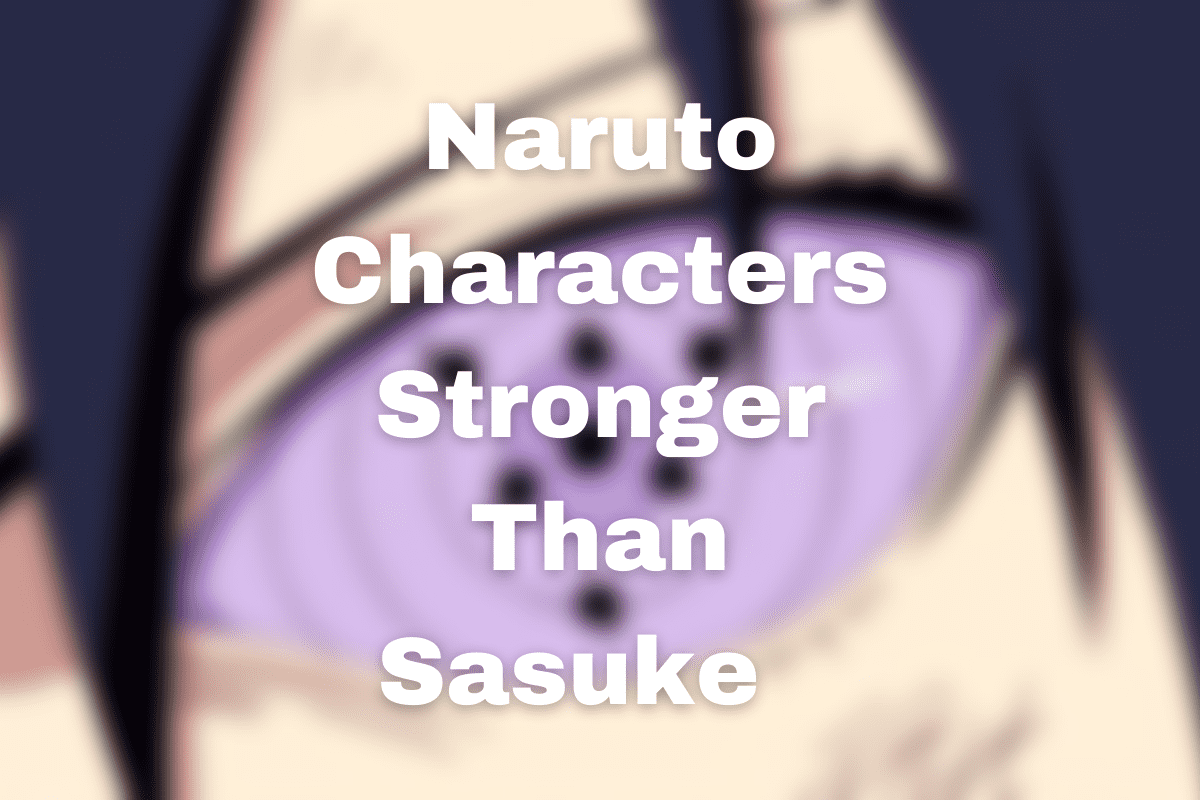 Naruto is inevitably one of the most iconic, popular, and well-watched anime series. Since they are kids, Amy has been a fan and maybe new in watching. Nonetheless, all enjoyed it well due to its exciting storyline. Naruto’s characters have many stories to share, and one of the most known characters is Sasuke. This ninja is considered one of the powerful ninjas; however, there are still many characters in Naruto that are much stronger than him.

Some characters in Naruto stringer than Sasuke are Madara Uchiha,  Itachi Uchiha, Kakashi, Obito Uchiha, Kaguya Otsutsuki, Orochimaru, Pain, and many more. These characters in the anime series brought suspense, and they are considered more potent than Sasuke.

The characters mentioned showcasing their skill and talents in many fights. Though Sasuke may be considered one of the strongest ninja, many can still surpass his skills. Though Naruto and Sasuke fought many battles and Naruto has been defeated multiple times, in the end, Naruto was able to beat Sasuke, and he was able to achieve that goal.

Pain is one of the characters in Naruto that seems to have a mysterious character. He is one of the complex villains who have the knowledge and skills in Ninjutsu technique. It looks like his power continues to grow over time; the more you will know about his back story, the more you will understand how powerful he is. His ability in the Ninjutsu Technique makes him powerful where it can be leveled with Sasuke’s capabilities or even surpass it.

Pain has the link to the Uzumaki clans, and he is considered influential by others due to his wealth of durable chakra. On top of his Rennegan, it would allow him to do the more taxing technique that Sasuke could. Pain could go on top of battles with Sasuke merely because of his chakra.

Kakashi has a lot of characters and skills that could surpass Sasuke’s skills. However, one of the aspects that stands out why he is more potent than Sasuke is his leadership. After all, he is the first sensei of Sasuke. Kakashi is a strong leader and is one of the strong shinobi.

Madara, I the leader of the Uchiha Clan, and he is the first in the clan to master Sharingan. Moreover, he was able to seal a tailed beast inside of him that made him powerful. This made him have and provided him with a strong chakra that many ninjas do not possess.

Sasuke may be good in Sharingan, but the skill did not surpass the level of expertise of Madara. Madara is considered one of the most dangerous shinobi of his generation. It is believed that Sakuke may not hols his pwn fight with Madara.

Obito came to form the Uchiha clan and is one of the last to appear. Obito comes with a very complex character whom Madara trained early. When he started to show off his talent, he lived up with the challenge of using them. Obito sealed the Ten Tailed Beast inside of him just like Madara. Obito is like Madara; they both have the skill of controlling the beast and use Sharingan. These characters and abilities were able to make him surpass the skills of Sasuke.

Shino is one of the characters in NAruti has an odd and creepy character. These characters make him disturbing and unusual. Though Shino may have an unforgettable character in the series, he is also one of the shinobi considered strong ability. Shino has bugs that can devour the opponent’s chakra. Shino is deemed one of the talented ninjas that master the chakra absorbing technique. He can maneuver opponents as his bug strikes them.n This skill of his has been honed solely by his clan.

Tsunade is one of the Hokage and is considered one of the robust characters in the series. Her character unveils over time, and she was able to show her power and skills as she became the Hokage. She is the most potent being among the three pupils of the third Hokage. Tsunade and Sasuke are considered to have the same level regarding ninjutsu.

Tsunade is likely the greatest medical-nin of all time. Though some may not consider it a technique, her skill is still an asset, especially her Creation Rebirth Technique, making him a strong opponent. This remarkable technique makes her heal any wounds that she receives. It heals instantly.

You may think that Sakura Haruno, at first glance, should not be on the list, but the fact is, he is considered one to be listed. Sakura is deemed an even level with Tsunade when it comes to her straight. Sakura became one of the most potent medical-nin as the Fifth Hokage trained her. She may have been surpassed Tsunade at her level. The medical skill of Sakura gave her have the edge over Sasuke. She is also intelligent and can spot genjutsu that outs her above Sasuke.

Sasuke is one of the most well-known and most exciting characters in Naruto. He is known to top his class as the series started and trained as a ninja. Many look up to him as powerful, profound, and skilled. However, it can be denied that though he is powerful, there are still many Naruto character that has surpassed him in many ways. Though there are lists of the characters that are more likely above him, it can be denied that he, too, is powerful.