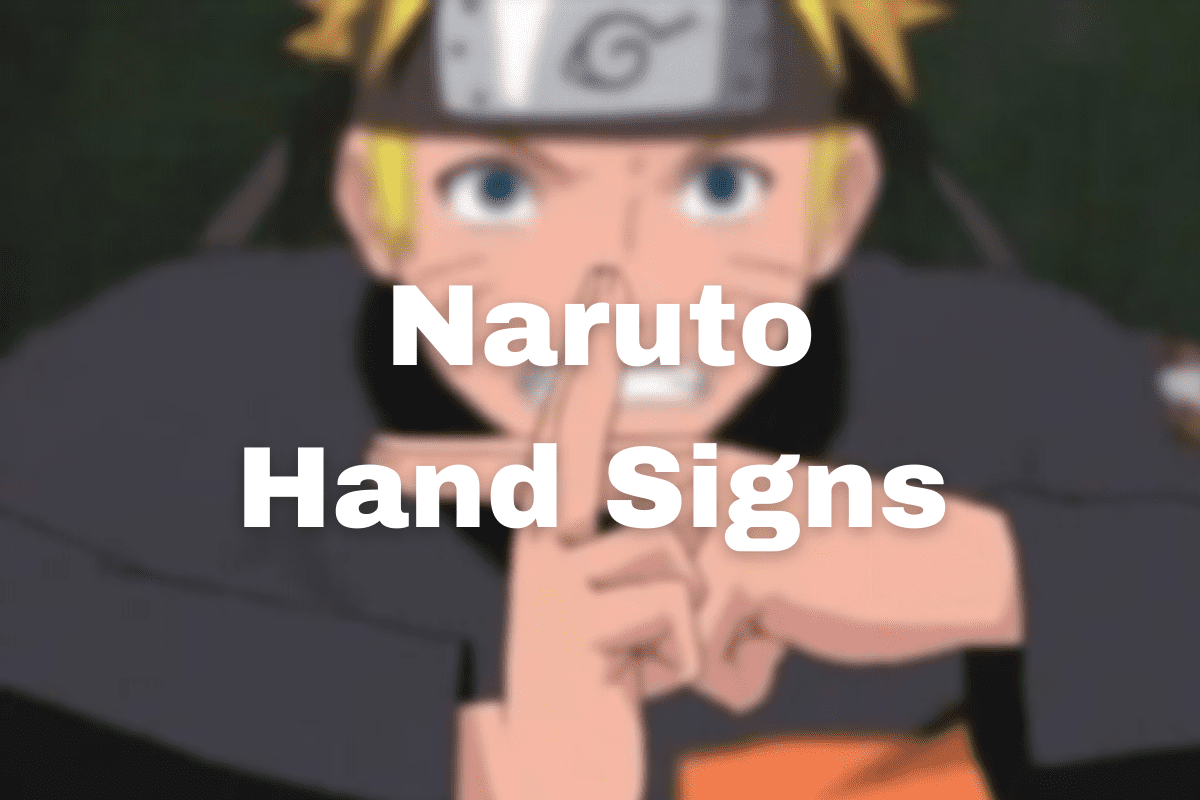 When watching Naruto or reading manga, it is noticeable that they are fighting using different techniques and come with varying hand signs. They are using these hand signs to have a unique hand sign that they may use while fighting. Each hand sign varies, and each comes with a different purpose. In the Naruto series, Naruto has tough training. His two main ninja disciplines are part of it, the ninjutsu and the genjutsu. These require lots of textbook knowledge.

There are so many hand signs that are seen in the Naruto series. This includes the Tora,  Mi,  Ne, Hitsuji, Ushi,  Saru, Uma, Usagi,  Tatsu, Inu, I, and Tori. The ninjas’ techniques are based on the give 12 hand signs or seals. If you do the math in computing it, the combination may become millions. Note that repetitions are not allowed.

Though there may be various hand signs or combinations, if you are an avid Naruto fan, you can quickly identify each signal. You can start your ninja training by just watching the series. If you are looking for more details regarding more info or meanings or each hand sign, I have gathered details to check.

The Chinese Zodiac represents the tiger in Tora, and the tiger is the year’s animal. As appropriate, Tora is specifically designed to be used in conjunction with the Fire and Earth Releases. A Tora is the most straightforward and visually appealing of all hand gestures. Sasuke generally seals his hands with this emblem before using his clan’s signature Fire Jutsu.

In the Chinese Zodiac, Mi is also referred to as the Snake. The Earth, Lightning, and Wood Releases are all associated with this hand seal, and as a result, it is the hand sign that is most frequently observed throughout the series. This hand sign is used as a signature Jutsu by most ninjas in the Naruto series, and it often appears throughout the series. Because it is generally recognized as the most frequently used hand sign, it is also considered the most straightforward to execute.

In the Japanese language, the word Nezumi or Ne signifies Rat. As a bonus, it corresponds to the animal in the Chinese Zodiac. It is linked to the natural metamorphosis in the same way other hand signs are. This significant hand gesture is primarily used by the Nara clan, where Shikamaru originates. This is a necessary aspect of using the Shadow Imitation Technique, which is considered preoccupied and cannot be overlooked.

Historically, Histuji was founded on the Chinese zodiac sign of the Goat, which served as a foundation for the hand technique. Using the Ram hand symbol may not always indicate the presence of fundamental natural processes. When it comes to Naruto, the Ram is one of the most common and well-known hand signals to be seen and heard. This is because Naruto himself enjoys utilizing it to create shadow clones of himself and other characters.

Ushi, commonly known as the Ox, is a fictional character based on the Chinese zodiac animal of the same name. The use of the Ox in a variety of fire jutsu and techniques is not required for any nature transformation release. Yet, a significant number of ninjas, particularly Sasuke and his older brother Itachi, continue to do so. To put it another way, the Ox appears in nearly every important name in the Uchiha family tree.

The Monkey, the Chinese zodiac sign, is the inspiration for the name ‘Saru.’ Sasuke employs it extensively during the first two phases of channeling his Chidori, even though it plays a minor role in the unleashing of nature’s transformative powers. Sasuke is a formidable opponent because he effectively understands the use of hand signs.

In Japan, this mammal is referred to as Uma. This animal is represented by the Chinese zodiac sign Uma, also the Japanese word for horse. It is not required for the essential nature transformation release; however, Sasuke is frequently seen making the hand gesture for his Fireball technique, which is unnecessary for the entire nature transformation release. It is also employed in the removal of bogus genjutsu techniques.

The Rabbit, the Chinese zodiac sign, is the inspiration for this hand sign. When Sasuke and Kakashi channel the Chidori, or lightning hands, they will frequently use the Hare, also known as Usagi in Japanese, to aid them in their efforts. Unless you intend to alter your nature, you do not require this method.

People also refer to it as the Dragon because it is the animal’s Chinese zodiac sign, the same as the Western zodiac sign. Because it does not have any elemental attributes associated with it, it does not require the usage of a precursor for nature transformation jutsu to be effective. When combined with those items, it transforms the element into a dragon.

The Inu, also known as the Dog, is based on the Chinese zodiac sign of the same animal, which is to be anticipated given the animal’s name. This particular hand sign is used in connection with the Water Release technique, which is discussed further down. The Tori hand sign is also vital in nature transformation techniques.

I, often known as the Boar, is based on the Chinese zodiac sign of the Pig. It is not required in the case of any particular basic nature transformation strategy. However, to conduct a good summoning jutsu, it is essential to have a strong foundation, the one first introduced to Naruto by Jiraiya to summon giant sentient toads.

Tori is named after the Rooster, the Chinese zodiac sign for Tori, translated as “bird.” Alternatively, Naruto’s hand sign represents wind or the Wind Release nature transformation, which is represented by the letter Y. It enables the user to learn ninjutsu techniques that are dependent on the wind. Naruto, a user of the Rasengan, is a massive fan of this hand gesture and the skills that go along with it.

The Hand signals are the most common things that ninjas must know. This is typically part of their training. Each hand sign symbolizes something and has its distinct meaning. There are so many combinations of hand signals that you may see that ninjas are using throughout the series.