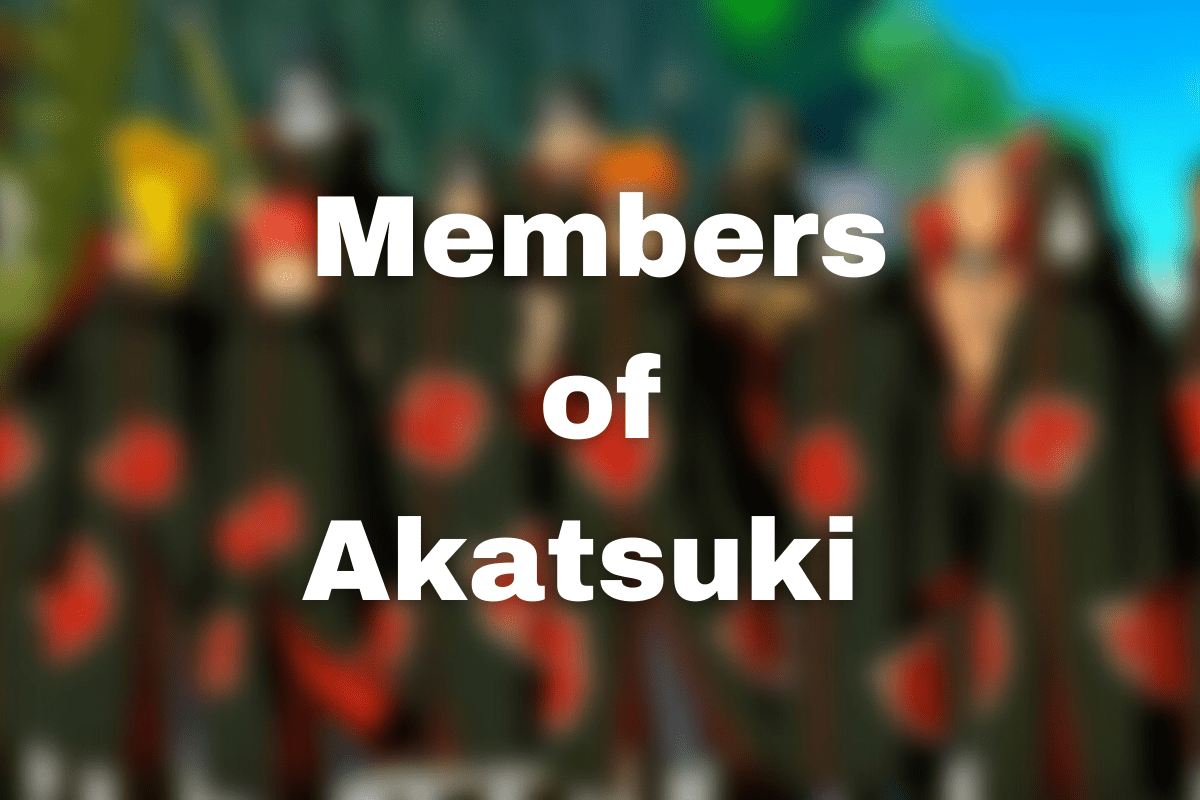 Naruto is one of the most influential and well-known anime series. It cannot be denied its popularity since it can be seen anywhere. You can see them in random posters, books, clothes, and so on. Characters are so popular; I am talking about the good ninjas and about them, The ones that are on the opposite sides. If you have been a Naruto fan for years, you already know details about the Akatsuki.

One of the most diminutive but very powerful villains in Naruto is the Akatsuki. If you have their background story, you may know what brought them to the opposing side.The Akatsuki Members includes Kie, Daibutsu, Kyusuke, Zozu Biwa, White Jetsu,Yahiko, Hidan, Sasori, Deidara, Kisame Hoshigaki, Kakuzu, Konan, Shin Uchiha, Blavk Zetsu, Kabuto Yakushi, Itachi Uchiha, Orochimaru, Pain, Obito Uchiha, and Madara Uchiha.

These Akatsuki members are compelling and skilled. Though they may be little in number, they have showcased their power in many battles. Akatsuki can take on elite ninjas and even the powerful Tailed Beasts. Though many Akatasuki are powerful, not all are considered one.

Madara Uchiha is one of the most prominent and well-known Akatsuki members. He has laid his groundwork in the Akatsuki group and manipulated the organization from behind curtains. He possessed Obito’s powers to a much greater degree. He could defeat the Allied Shinobi Force as he is skilled in using Sharingan and Rinnegan. He also staved off the effort of Naruto and Sasuke in defeating him. He is one of the deadliest villains in the Naruto Series. Madara is considered the most vital member of the Akatsuki and perhaps felt the most powerful villain in one-on-one combat.

Obito Uchiha is also called Tobi. This was his name when he hid his real identity from the other members of the Akatsuki organization. He possesses the power of Sharingan, Rinnegan, and the power of the Ten-TAils. These skills and passion make him myriad abilities that include intangibility, mastery over the six chakra elements, and access to all Nagato’s capabilities. He also can destroy nearly anything using the Truth-Seeking Balls Technique. Though the possession of this power came only in a short period, it took the Allied Shinobi Forces to stop him. He became nearly invincible, and if it was not for the efforts of the thousand-strong army and if it is not because of Madara, he would have become more unstoppable.

Pain is blessed with the legendary Rinnegan that Madara had created. His name is Nagato, but he used Pain to turn Akatsuki into a criminal organization. He has the goal to control humankind by focusing on hatred. He uses his Rennegan to control the corpses that come with unique abilities. Not only that he is top when it comes to mastering each element, but Nagato could also destroy the entire city constantly by just creating a massive force. Technically, he has the ability and might of a whole army, and he was only stopped by Naruto s Sage Mode and the Nine-TAiled Demon Fox’s Chakra. Nagato is considered the most extensive potent iteration of the Akatsuki since he was more substantial than most.

One of the most self-interested characters in Naruto is Orochimaru. Heis also considered one of the most vital members of the Akatsuki. HE is one of the legendary Sannin, and a prominent member of Akatsuki as the organization helps him for his self-interest. Orochimaru has been battling many heroes in the series and has come to live to learn from those battles. His body has been modified several times as he was now able to possess many abilities after absorbing the bodies into his own. The great thing about his skill is that he possesses much knowledge of ninjutsu compared to other characters in the series. When battling with Orochimaru, one must have inhumane talent and capabilities.

Itachi Uchiha is considered the most skilled ninjutsu and genjutsu in the entire series of Naruto. He became the organization’s spy as he acted as a member of the organization. He also has extraordinary ability as he is a master of the Sharingan’s most advanced techniques. This also includes the inextinguishable flames of Amaterasu, the illusions of Tsukuyomi, and the battling avatar Susanoo.

If it is not because of Itachis chronic illness, he would become the most potent and most vital character in the series. Many of Itachi’s opponents tried to surpass his genius-level intellect and talent, but they failed due to his unmatched skills. Those who are only given more excellent natural gifts than those who come with decades of training can match the multifaceted Sharingan abilities of Itachi.

Though Kabuto is not the official Akatsuki member, he is considered connected to the organization since he works as a spy and fights to their benefit during the Fourth Shinobi World War. He uses the knowledge that he learned while he was working with Orochimaru. With his learnings, he became strong enough to defeat any foe that may directly contact him.

Itachi was the only one to defeat him as Itachi trapped him with the never-ending genjutsu that forced him to genetically enhanced ninja to consider his life choices. Kabuto’s strength and combat ability are impressive, and he has almost become without a rival. Only those powerful ninjas may incapacitate and defeat him in a battle.

Akatsuki is a famous organization in the Naruto series. Though it may be a small organization, it became the ninjas’ most destructive and powerful enemy. They have been the reason for war in the series, and they have been killing many that hinders their plans. Members of Akatsuki are compelling and skilled that those powerful ninja heroes are the ones who can only match them in battles. Though the series’ heroes are trained in combat, they have been hard at defeating Akatsuki. Over the series, the Akatsuki brought thrill and challenge that made the series enjoyable to watch.