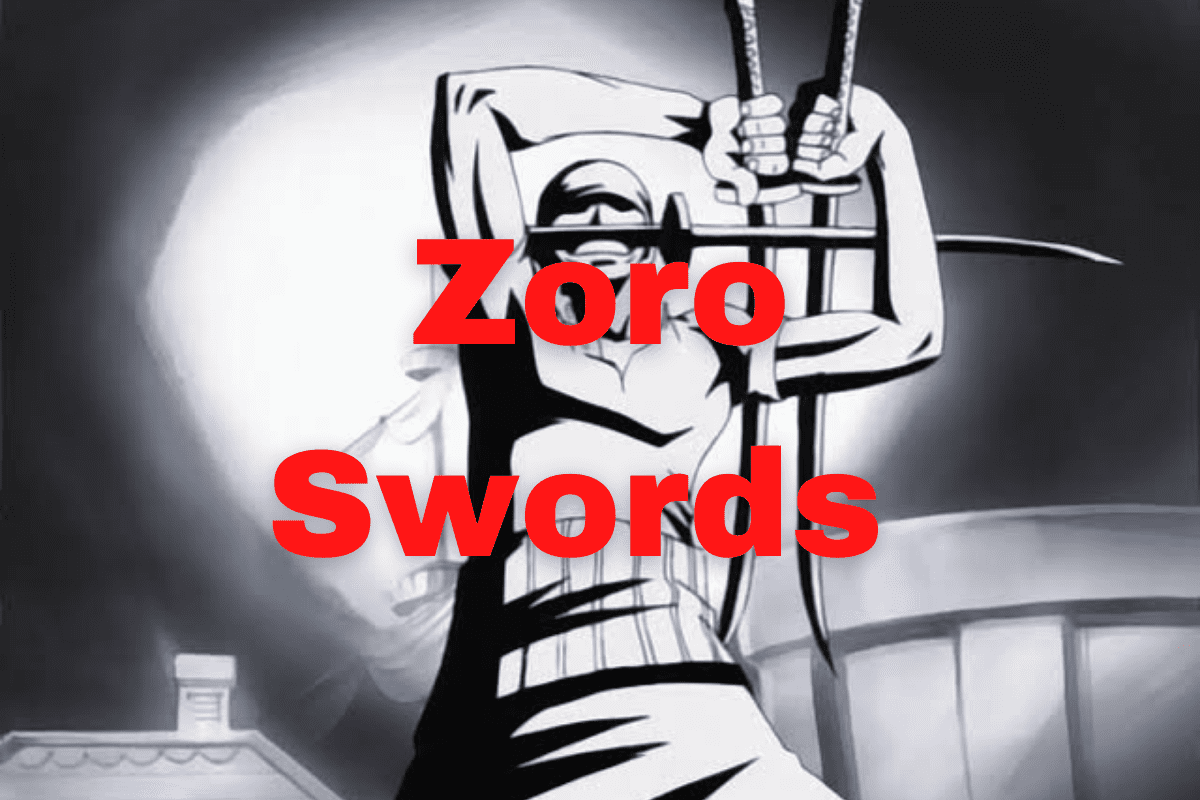 One of the interesting fictional characters in the anime “One Piece” is Zoro. He is one of the first crewmates who joins Monkey D. Luffy’s crew/\. This happens after he has been saved from the execution at the MArine Bse by Captain Morgan. Zoro is one of the vital members of Luffy’s group and is known for being a great and robust swordsman.

One of the three great swords of Zoro is Wado Ichiminji (white), Sandai Kitetsu (red), Enma, Yubashiri, and Shusui (black). These three excellent swords of Zorocame from the Thriller Bark to Wano country. Each of these swords comes with unique capabilities and special features.

Zoro is very tactical in war though he is not more in laying out planned actions. With the help of his swords, he could finish and win battles. These swords are not only famous for their purpose but also, there is a deep and exciting history that must be unveiled and known. If you are a fan of Zoro or just curious about his swords, I have details for you to check, kindly read them below.

Santoryu is one of Zoro’s signature styles wherein he wields the three swords that he is carrying by himself in his hands. One of the swords is in his mouth, and his hands hold the two. This wielding sword comes with different hit attacks. The direct hit attack is called the Oni Giri, and a compressed air projectile attack is called the Hyaku Hachi Pound Ho.

These three sword styles require a significant amount of tedious training to develop superhuman bot arm and jaw strength and immense ambidexterity to use all three swords effectively. Zoro needs to do a lot of eccentric training exercises from his childhood to young adult life to master it fully.

Enma may turn to a Black Blade.

One of the most powerful words of Zoro is Enma. It is considered to be one of the twenty-one Freat Grade Swords. Enma can grow and develop as robust as one of the twelve Legendary Grade swords. To turn Enma into a black blade requires a maximum of esteemed sworders to flip it. This sword is considered one of Zoro’s treasured weapons, given to his master. After his childhood friend and his most significant rival’s untimely death, this weapon became his.

One of the mythical blades from Wano is the Shusui. Zoro, throughout the Thriller Bark Arc, discovered it. This excellent sword belonged to a skilled swordsman known as Shimotsuki Ryuma. Many respects this sword as a country-wide treasure. This sword is of rarity and power that it is justified as an iconic sharp edge of the black blade. It is sade the sword made black withinside the fingers of Ryuma.

One of the fascinating swords of Zoro is the Wazamono Blades. It is also sometimes called the Grade Swords, classified within the One Piece Universal, being described as the first-rate of every sword. Wazamono blades are considered the highest quality of knives. For the record, Zoro has wielded five of the mythical swords. These numbers are considered the maximum number a man or woman has wielded so far.

The first sword ever wielded by Roronoa Zoro is the Wado Ichimonji. Shimotsuki Kozaburou, who came fe=rom Wano country, is the one who forged this sword. These known swords have previously belonged to Koushiro, a dojo master of Zoro, from Shimotsuki Village. Supposed to be, the sword must be inherited by her daughter Kuina.

Enma: The Strongest Sword of Zoro

One of the most robust blades of Zoro is the Emna as of the moment. It is one of the twenty-one Great Blade Sword, which can become as strong as the 12 Legendary Grade Swords. Zoro takes the challenge of taking Enman, hoping he could turn it into a black blade.

Sandai Kitetsu is considered one of the grade swords and is deemed the cursed sword among the swords of Zoro. This sword is one of the creations of Tanguyama Hitetsu. Zoro picked this sword from a barrel of cheap katanas in a shop. He decided on this sword in the Loguetown after verifying and checking the quality. Soon after, Tashigi identifies this sword as a cursed one.

The sword that has great personal importance to Zoro is the Wado Ichimonji. This sword once belonged to Kuina and her family. Wado Ichimonju is also considered one of the 21 Great Blade Swords. When Kuina died, Zoro requested she and her father get the sword given to him. This sword is essential to Zoro because of Kuina and because this sword is one of the most powerful swords in the world that Tashigi described.

Zoro has many collections of blades of different forms to one another. Each sword has its rich history and purposes. Each sword has its capabilities on how it will be used in the battle. Before Zoro became good at handling swords, he went through a lot of complex and extensive training from his childhood into his young adult years to master the skill of using these words.