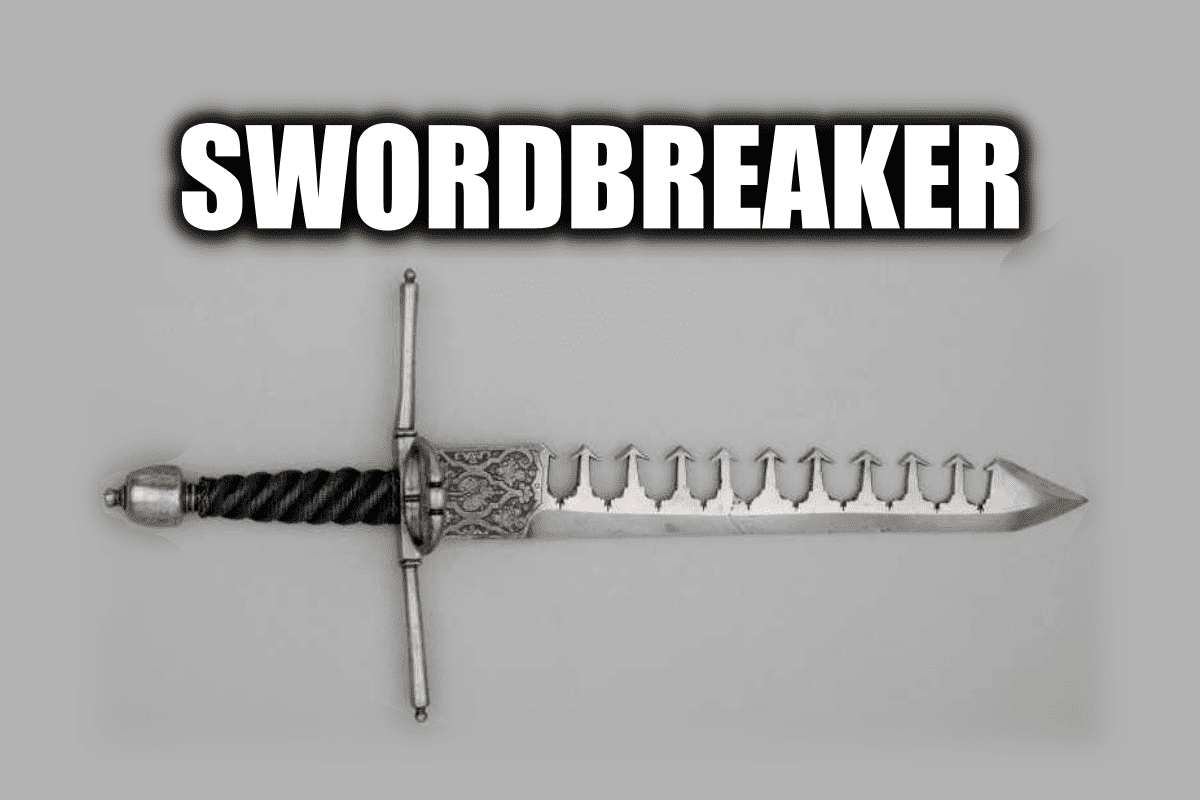 I know what you’re thinking when you first heard of the word sword breaker, and it’s not what you think it is! Same as you, I thought that a sword breaker was a massive sword that could literally crush an opponent’s sword into pieces. On the contrary, a swordbreaker is merely a dagger!

A sword breaker makes a lot of sense in battle, but it has never been used extensively by swordsmen.

However, we’ll find out in this article what a swordbreaker really is and see if there’s such thing as a literal swordbreaker that could make hundreds of swordsmen tremble in fear in sight!

What is a Swordbreaker and How Does it Work?

A sword breaker is basically a parrying dagger that has barbs on the outside of the blade designed to trap your opponent’s sword.

It is a special type of parrying dagger, designed to be used in succession with other techniques, allowing you to use your opponent’s own momentum against him.

When your opponent tries to stab you, the sharpened point of his sword will glance off the barbs and deflect his own weapon to the exposed and vulnerable area of his body, or it can be an opportunity to disarm your opponent if you’re able to redirect and trap his blade in the barbs.

In this case, the barbs act like “traps” that allow you to pull his sword from side-to-side and out of his hands. The blade of a swordbreaker is made to deflect swords. It was designed as a tool to defend against thrusting and slashing weapons.

The swordbreaker is a good “companion” weapon to any long-bladed weapon. The left hand is where you normally hold the swordbreaker, with the barbs positioned forward. The sword breaker actually “breaks” the attack or momentum by catching your opponent’s blade and disarming him.

How do you use a Swordbreaker and Does it Really Work?

Well, let’s say you are attacked by an armed man with a long sword.

If you are able to do this, you will have disarmed your opponent and you will be free to deal with him in any way you choose.

Without a wide number of these unusual daggers being found in numerous collections and corroborating contemporary descriptions of their use, it would seem that perhaps Castle may be right in questioning the actual use of these.

As Fearn has noted with the Japanese examples, maybe this was just fanciful gadgetry.

We can find wonderful examples of this kind of weapon in Items A867 and A868 from the Wallace Collection by Sir James Mann.

These 2 items are actual sword brakers. If we take a close look at item 867 we can notice that it has 14 teeth, each one fitted with a spring catch that would allow a sword to enter but not withdraw.

The advantage of using the swordbreaker in this fashion is that it can be used to disarm your opponent and stop his counterattack while allowing you to strike him with your longer-bladed weapon at the same time.

It is important to remember that the sword breaker was not designed to be a counterattack weapon. It is designed to be a weapon that “breaks” the attack or momentum of the opponent’s sword or another long-bladed weapon, giving you the opportunity to counterattack with your own long-bladed weapon. The barbs would do the work of a second pair of hands, allowing you to easily disarm your opponent.

The barbs are designed so they deflect a sword’s edge by “snagging” on it. If your enemy attempts a downward strike with his sword, the dagger will catch the blade on the way down, preventing your opponent from using the force of his downward strike to thrust or slash you.

In ancient times, the Chinese had a weapon called the Jian, also known as the Chinese sword breaker. The Jian was used in ancient China to literally break edged weapons. It has a rectangular cross-section with very sharp corners and therefore very efficient in delivering powerful hits that can either deform or break any bladed weapon.

This makes it the perfect weapon to use against other edged weapons, such as knives, daggers, swords and so on.

It simply means it literally was designed to destroy bladed weapons, whereas the sword breaker in the West was actually a parrying dagger designed to render your opponent’s bladed weapon useless by trapping the blade in the barbed teeth of the swordbreaker.

Which is Better as an Off-Hand Weapon: a Shield or a Swordbreaker?

Surprisingly, most people who pick up a shield for the first time cannot even begin to master the simple task of using it as a shield. They are so focused on trying to swing the shield like a club, they don’t realize they are missing the entire point of having a shield.

A shield is there to protect you, not attack your opponent. A real swordsman knows that a shield is more useful as a defensive tool than an offensive one. He uses his shield as a crutch to keep his balance and to protect himself from getting hit while he attacks with his sword.

Does Using A Swordbreaker as an Off-Hand Weapon Make You A Better Fighter?

Using a sword breaker will make you a better fighter. The reason is simple, if you are fighting against a skilled swordsman, he will almost certainly have a sword that has a very sharp edge. When you encounter a sharp-edged sword, what you do is, attempt to avoid it by using your own blunt weapon to block or deflect it.

When you use a swordbreaker, this skill translates over to using a blunt weapon to disarm your opponent, since you won’t be using your swordbreaker to cut or hurt your enemy. Instead, you have your primary weapon best fit for the job.

It takes a lot of skill using a sword breaker than a shield as an off-hand weapon. Why? Because when you are blocking or parrying with your shield, you are always in control and have a certain amount of “safety” to protect yourself with. However, when you are using a swordbreaker as an off-hand weapon, if you even slightly misjudge the force of the blow and end up not being able to successfully disarm your opponent, what you have done is, you have given your opponent the chance to attack you with his or her own sword!

Now that we know what a sword breaker is, what it does, how to use it, and its history, we now have sufficient data to decide if it’s any good. I would say that it takes a lot of skill to use the sword breaker. Catching an opponent’s blade with a short, tiny dagger with deep serrations that only leave a margin of an inch of the blade is not a joke.

A swordbreaker can only be good if it is in the hands of a skilled user, otherwise, the majority should be much safer with a shield as an off-hand weapon.