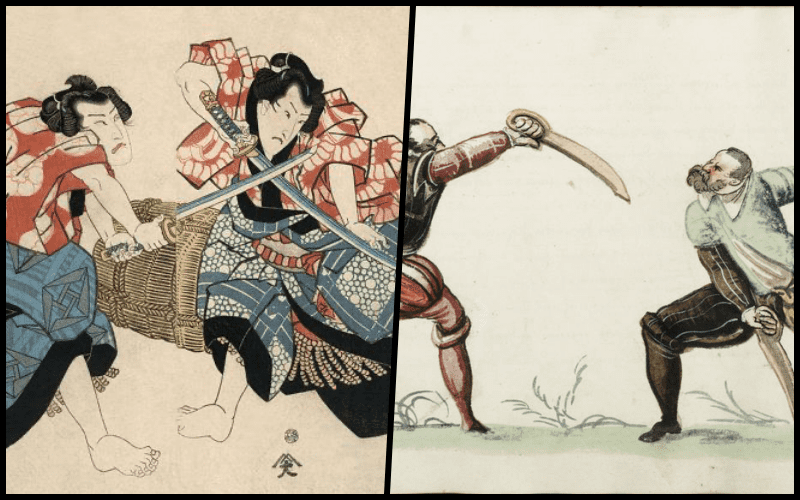 We all have that childish memory back in the day when we would grab anything we could get our hands on and swing it as if we’re holding a sword and engage in a sword fight against our brother or sister. Most likely, you would win against your brother, but definitely not with your sister! In this article, we’ll discuss sword fighting styles and let’s see if we’re able to execute any of them during our crazy moments as a kid!

This article will focus on the 2 most famous sword fighting styles: eastern and western, breaking down all the fundamental differences between the two.

The Relationship Between Swords and Sword-Fighting Styles

There are many ways to use a sword in combat and each one has a specific name. These names tell something about the way the sword was used in that particular period of time. Sometimes it is the way the sword looks like that gives information about the style. For example, in the Middle Ages, when swords were made of steel, they often had a distinctive shape called “double-edged”. This means that there were two sharp edges on both sides of the blade. The double-edged sword was extremely effective against armored opponents. It also made it possible for the warrior to use the edge of the sword to slash and cut his opponent while keeping himself safe from being injured by the other side of the blade. This particular fighting style was so effective that it became the standard against which all other styles were measured. Even today, when people talk about “the way things were done in the past”, they are often talking about the double-edged sword fighting style. Hence, this particular fighting style was named after the weapon that inspired it.

On the whole, the way a sword is designed and how it is used varies greatly from one region to another. Even within the same country, there are different regions that have their own distinct way of using a sword. Take Japan for instance. The way they use a katana is very different from the way Chinese use a jian (the forefather of the katana, since it was the Chinese who introduced the forging technology to the Japanese that gave birth to the katana). In the old days, Japanese warriors were often hired by foreign countries to help protect their interests in those countries. Because of this, many Japanese became proficient in several different styles of sword fighting. Today, there are still many swordsmen in Japan who can fight with equal skill using any of the three primary styles (which we will discuss in detail later). However, most modern-day Japanese sword fighters are very proficient in only one style and they stick to that style throughout their career. Why is this? Well, it’s quite simple; most people find it much easier to learn and master just one style and then apply that style to any situation.

This does not mean that other styles are not effective. On the contrary, each sword fighting style has its own unique advantage over every other style. What I am trying to say here is that each culture has developed a specific way of fighting with a sword which is very effective against the enemies of that culture. Hence, when you are designing a sword for combat, you should give serious thought to the fighting style that goes along with the kind of sword you intend to forge and use. The way you fight will determine the type of sword you need most.

Although this may be true for most people, not for everyone. There are some people (very few) who are born with what I call “sword fighting DNA”. These people have a natural ability to recognize and exploit the weaknesses of their opponents no matter what style of sword fighting they are using. These people are able to see the forest for the trees. They don’t get lost in the details of a particular fighting style but rather, they are able to recognize the general patterns that underlie all styles. This is an important consideration if you ever decide to learn sword fighting. Some people teach only the technique. However, if your goal is to become a great swordsman, you must also learn to think like a great swordsman. Only then will you be able to exploit the weaknesses of your opponent and win every fight.

Types of Sword Fighting Styles Classified According to Culture

What Is The Western-Sword Fighting Style?

‘Western-sword’ fighting is the term we use for a style of fighting where you hold a sword in one hand and use the other hand to parry and attack with various weapons or a shield. Examples include the arming sword, rapier, and sabre. The Western-sword fighting style is based on the style used by the Germanic tribes that invaded Imperial Rome in the 4th century. The Germanic tribes used a single-bladed sword, usually a long sword or long seax, and a shield. The Romans adopted this style of fighting to defend the Empire, and it became the foundation of their fighting style. And we all know how influential the ancient Roman empire was in the development of civilization moving forward.

Without a doubt, this is the most popular style of sword fighting in the world. It is also the style I personally prefer. Why? Simply because I believe it is the most effective style of fighting with a sword, at least, in the western part of the globe. The reason is simple; the Western-sword fighting style is based on the principle of “overcoming your opponent’s weapon with your own weapon”. What this means is that, when you are using a longer bladed weapon such as a longsword or a sabre, you use the length of the blade to “cut” through your opponents’ attacks and then you use the sharpened edge of the blade to “poke” or “stab” your opponent. This is an extremely effective way to fight and has been practiced for centuries. However, if you ever find yourself in a confrontation with a person who is proficient in this style of fighting, you will soon discover that they have a very difficult time dealing with someone who is fighting against them with a different style. This is because they have been trained to think in terms of fighting against a long sword instead of against a shorter, sharper one. What should you do if you are suddenly confronted by a good swordsman who is using the Western-sword fighting style? The answer is simple: You must learn how to use a different style of fighting against him. But how do you do that? Well, the first step is to realize that your only hope of winning is to make your own weapon (in this case your own sword) as effective as possible.

What Is The Eastern-Sword Fighting Style?

On the whole, Eastern-sword fighting is a much more elegant style of combat than Western-sword fighting. It is also a much more effective style of combat in terms of flexibility of movement. The difference between the two styles is in how each fighter utilizes his or her hands. In Western-sword fighting, you use your off hand to parry and attack with whatever weapon you have in your other hand. Whereas in Eastern-sword fighting, you use both hands to fight with the sword. An example of a fighter who relies on the Western-style of sword fighting would be someone who fights with an arming sword. He will parry and counterattack with his shield. Another example would be a person who fights with a long sword or a long seax. They will parry and attack with their own long sword or long seax. On the other hand, an example of a person who relies on Eastern-sword fighting would be someone who fights with a katana. They will utilize both hands to fight with the katana. When they are attacked with a sword or any other weapon, they will simply sidestep the attack and counterattack with their own weapon. This is called “cutting under the arc of the swing”.  This is a very deadly fighting style that is difficult to learn but once you learn it, you will never forget it (especially your opponent!). It is used by many highly skilled fighters in East Asia, especially China, Japan, and Korea.

The “Parry and Thrust”

This style is based on the style used by the Chinese military in their ancient wars against the Japanese. It is a very effective style for close-in fighting. In this style, the goal is to get close enough to your opponent so you can make deep cuts with your sword. When he attacks you, what you do is slash at him with the edge of your sword while at the same time, you are sweeping him away from you with the length of your sword.

In this style, what you do is strike with the point of your sword in response to your opponent’s attack. This style is based on the principle that a man who is unskilled in defense is even more vulnerable when he tries to attack. Therefore, the idea is to attack him whenever he attacks you and to do so with great skill. What you should do when learning this style is to learn how to parry first. Take the case of a thrust by your opponent. What you do in this case is block his thrust by raising the point of your sword in front of his weapon in such a way that his blade misses you by a small margin. Then, you counter-attack him by bringing the point of your sword down on his weapon with all the force you can muster. As you practice, what you should do is keep trying to attack your opponent whenever he attacks you.