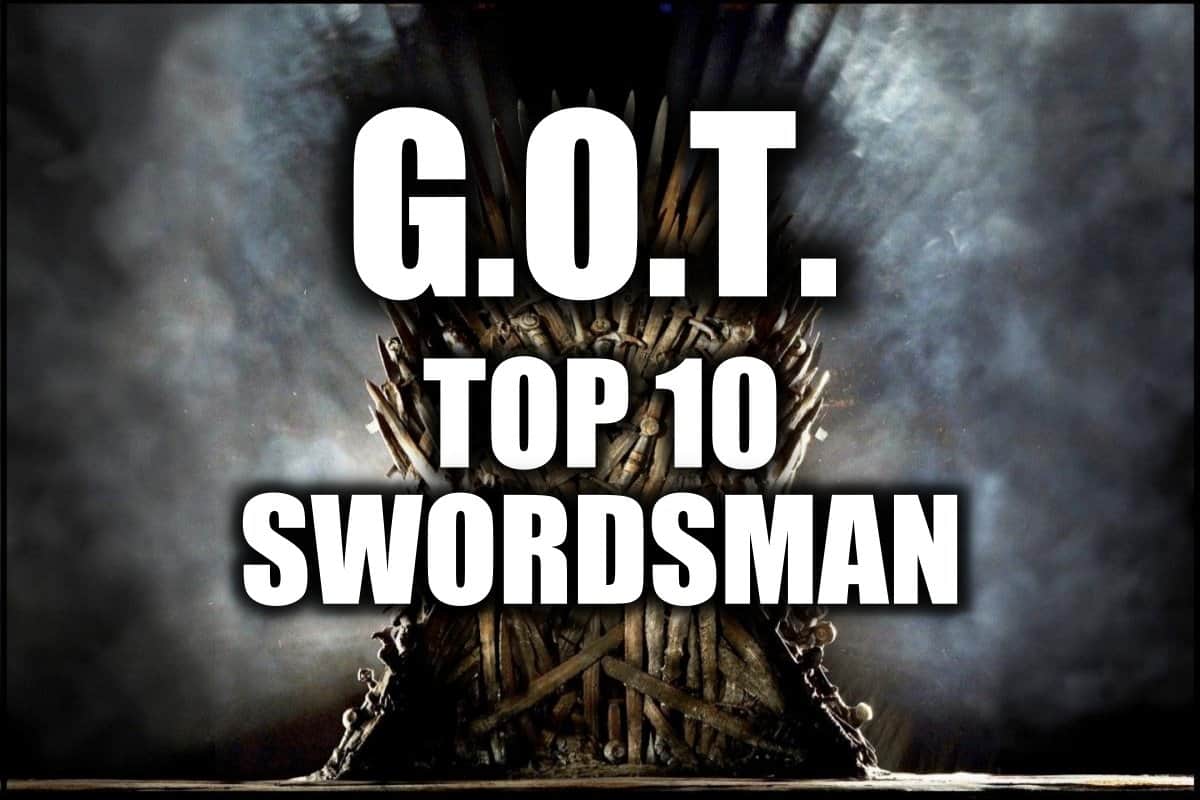 Other series lack the capacity to compel viewers to spend their time in the characters on screen, but Game of Thrones does so in a way that no other show can.

We guarantee that while you track these heroes and villains, you will be squealing with joy, yelling with rage, and bouncing with excitement.

And even some people just claim that it is a dragon-themed television show.

Look at these great swordsmen, though, to realize how good they are, here are our Top 10 Best Swordsman from GOT from weakest to strongest!!

In the Free Folk, Tormund is a legendary warrior and raider who is also known as Tormund Giantsbane. He is also one of the significant figures in the rebellion against Mance Rayder.

Tormund saw Mance as the King-Beyond-the-Wall and believed that he would be the one who would guide them through the Long Night of the Spirits. He is unquestionably a skilled fighter.

He is not scared of several things, and the Night’s watch considers him to be a menace, similar to Crowkiller’s perception of him. His personality is a little showy: Mance never boasts about almost anything, but it is apparent that Mance Ryder either defeated or frightened Tormund into submission in a battle.

Ser Gregor Clegane’s younger brother, Sandor Clegane, is a member of the Clegane family. After journeying as a runaway with Arya Stark and having an actual call with death, he unwillingly joins the Brotherhood Without Banners in the hopes of serving a more prominent cause than he originally anticipated.

Although he appears to be inferior to his older sibling, The Hound is a formidable combatant and a savage of a fighter. Furthermore, while Brienne “beat” him in fierce combat on television, she was actually battling a hungry and weak Hound in real life.

In the Game of Thrones series, Brienne Tarth, also known as Brienne of Tarth, is the elder of the Tarth children and the successor of Lord Selwyn Tarth. She is a member of the Rainbow Guard, which is under the command of King Renly Baratheon.

Following his death, she is hired as a personal assistant to Catelyn Stark. Brienne is probably approximately as competent as an above-average knight.

Still, she has a distinct advantage over her opponents due to the fact that they tend to underestimate her abilities. However, if you get into the world of very skilled male knights, she would have to give up a lot of strength and speed to keep up.

Khal Drogo was a Dothraki Khalasar who served as a chieftain. “The Great Khal” was a title he was frequently given.

Also named Drogon after his late wife, who used to ride Drogon, the last live dragon in existence, he is perhaps the namesake of the last remaining dragon in existence. Drogo is a strong Khal, or warlord, of the ferocious Dothraki nomads, who rule over a vast territory.

At the onset of A Song of Ice and Fire, he is promised Daenerys Targaryen, who will become his wife. Jason Momoa portrays Drogo in the HBO television adaption of the hit series Game of Thrones.

He is the leader of House Clegane, a feudal knight subordinate to House Lannister, and the older brother of Sandor, who is also the head of House Clegane. The Lannister soldier Clegane was among the first Lannister warriors to enter King’s Landing when Robert Baratheon’s rebellion came to an end, when the city was sacked.

Gregor was monstrously big, and he was the most powerful, intimidating, and feared man in all of Westeros. Known across the Seven Kingdoms for his unrivaled strength and stature, he was considered to be one of the most formidable and deadly individuals in the land.

He was reviled across Westeros because of his reputation for fury, cruelty, and rage, and he deserved to be.

Bronn is a talented and lethal sellsword who first comes to public attention when he defends Tyrion Lannister in the Eyrie during his trial by battle before the Iron Throne. Tyrion hires Bronn to be his bodyguard and enforcer, and he becomes Tyrion’s enforcer.

Unquestionably, he was a battle-hardened assassin, and there was no mistake about that. He was unquestionably a good fighter or, at the very least, an above-average fighter.  He has the ability to slay a large number of foolish knights. However, surviving a war does not imply that one is a skilled fighter; rather, it implies that one is a wise combatant.

He doesn’t have ego problems like Jaime, and he doesn’t have phobias like the dog. While he, like Oberyn, chooses his battles and weaponry wisely, he still leaves a lot to be desired in terms of essential combat capability when it comes to the game.

King Robert I Baratheon was the monarch of the Seven Kingdoms at the time of his reign. In the conflict known as Robert’s Rebellion, he conquered the country and ascended to the king.  Even though Robert wedded Cersei Lannister to forge alliances with House Lannister to keep the kingdoms together, the marriage was devoid of romance.

Robert, as a Baratheon, exemplifies the battling spirit that distinguishes the Baratheon family.  When Robert fights, he fights with passion. He fights with wrath and fury, which making him incredibly frightening and threatening.

We can’t speak for his strategic or tactical genius, but he was a well-liked leader and respected by his peers. He was regarded as a fearless leader, famed for sprinting to the battlefield on midnight marches. Robert was ready to forgive his adversaries if they bowed their heads in submission, and he handled them with dignity.

But, perhaps most significantly, he was constantly in the thick of things, fighting with the remainder of his army, and it was for this reason that his troops blindly followed him.

He was also the most potent man on the planet. According to legend, he is the undisputed finest swordsman of his time, and he is also deemed to be among the most immeasurable in the kingdom’s history.

He was one of the greatest, if not the best since Arthur Dayne is no longer alive and Selmy has passed the prime of his career. Yes, he is a fantastic warrior who is a genuinely magnificent knight in terms of his fighting skills.

Arya Stark is the daughter and youngest child of Lord Ned Stark and his wife, Lady Catelyn Stark. She is the youngest of the Stark children.  She is tomboyish, impetuous, combative, and independent, and she despises typical feminine activities.

She is sometimes mistaken for a guy because of her appearance.  The House of Black and White in Bravos trains Arya as a Faceless Man after she narrowly escapes the oppression of House Stark by House Lannister. She utilizes her newfound abilities to bring those who have harmed her family to justice.

Arya developed into a very skilled fighter, even though her abilities seemed impossible at the time. She used that small blade and her quickness to her benefit.  Hoping that the last two volumes will further detail how this came to be and what she learned while at Bravo’s.

No one, according to Arya, taught her that. She trained with the dog, with Bravo’s first sword, with the waif in stock combat, and she mastered the skills necessary to assassinate a large number of people with little assistance. The statement “nope, she can’t fight” or “D&D forgotten and make her a badass” is not sufficient; it is being asserted only on the basis of her gender.

He and Lewyn Martell were the only Dornish members of the Kingsguard under King Aerys II Targaryen, and he was the sole member of the Dornish family.

Known for his swordplay, when he eventually emerges during Bran Stark’s wargs to the Tower of Joy encounter, he is proven to be an extremely talented warrior, swinging two swords masterfully and cleaving through virtually every opponent he fought. He is regarded as a superb swordsman.

We know that some of you have shown disappointment that your favorite is not included on the list. Don’t be bothered! Your thoughts have been taken into consideration!

What we have on the list is the overwhelming majority of people who consider them to be the best of the best. Game of Thrones is unquestionably a show that is worth your time. It’s intense, brutal, political, and dramatic all at the same time.

Don’t become too connected to the characters, though, because every episode represents a significant danger for your favorite characters. Nonetheless, owing to the length of the episodes, it may not be worth your time to watch it a second time around.