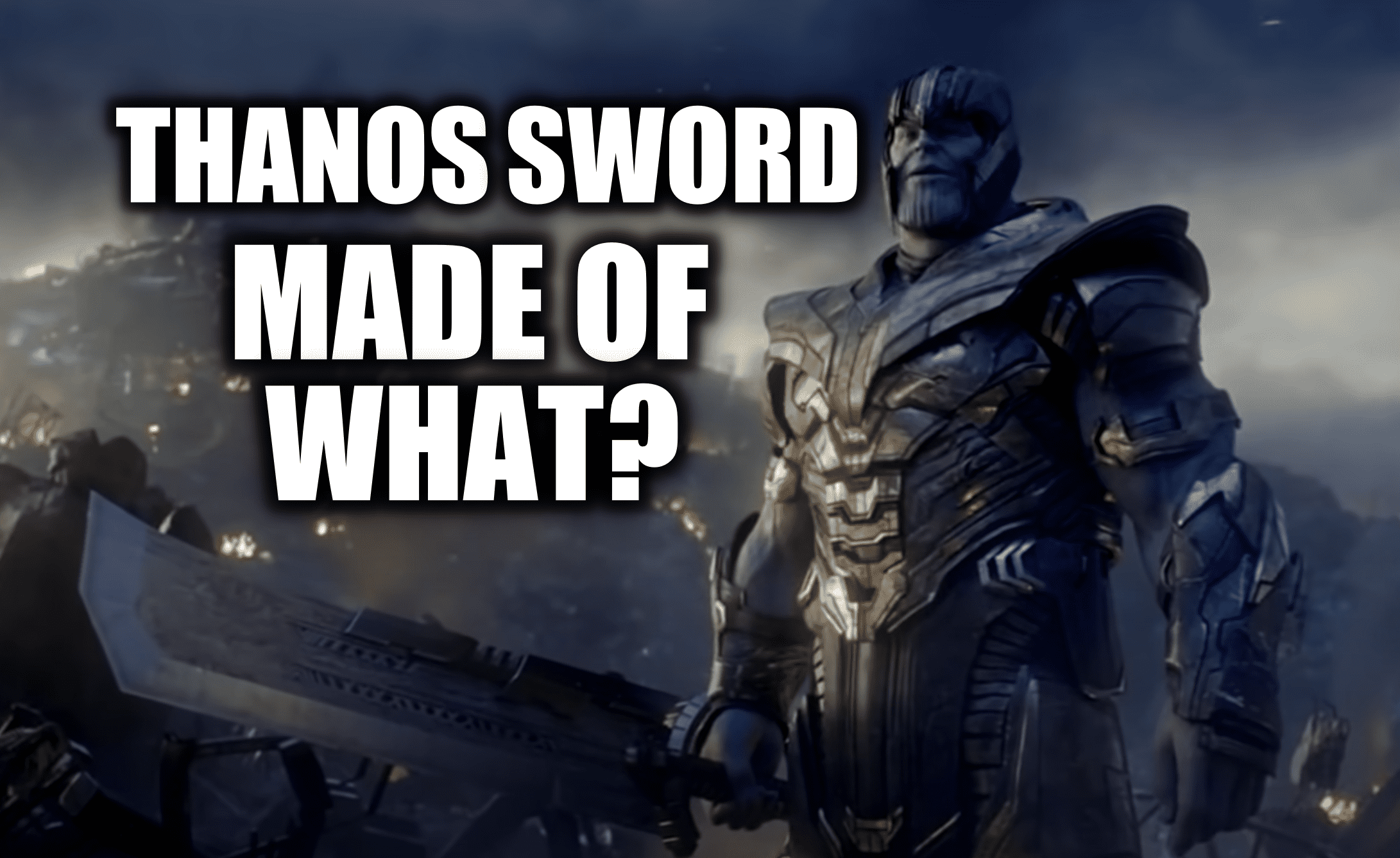 In Avengers: Endgame, we saw how Thanos, the wicked Titan, almost shattered Captain America’s Vibranium shield. It must be a tougher alloy than Vibranium if something breaks the Caps’ armor. There are a few ideas on the material Thanos’ sword is composed of. Let’s have a look!

Thanos’s sword is composed of either Uru or Yaka. Those are the two main theories on which metal the blade was created from. Thanos’s double-bladed sword is made from a tough alloy that could endure attacks from both Stormbreaker and Mjølnir.

Although Yaka isn’t as powerful as vibranium, it may be destroyed with a hit similar to the one used against Cap’s Shield in Avengers: Endgame. Uru is potentially tougher than vibranium, and Marvel Universe considers it a top-tier metal that falls short of Vibranium in several ways. Now let’s discover more!

Uru, Yaka, Adamantine or.. Vibranium Itself?

Thanos’ main weapon throughout his time as a warlord was his enormous Double-Edged Sword. It could be used as a tossing instrument that rebounded to Thanos like a boomerang, in addition to being a combat weapon. The guards of the sword may also form a circle, allowing the swords to whirl at high speeds.

Thanos shattered Captain America shield, demonstrating that whichever his blade is composed of is considerably more potent than Vibranium.

Thanos’ sword is constructed of a substance not existing on Earth, which makes it logical given that he has never explored the human world. In Avengers: Endgame, we aren’t informed what Thanos’ weapon is composed of, and even the movie’s directors aren’t sure. They claim:

“Clearly Thanos is a thousand-year-old character who has fought everyone in the universe and is the greatest: He’s the Genghis Khan of the universe, so he would have the greatest weapon. He knows of Eitri, he’s been to Eitri to have his glove created. Did he have them create his blade as well? Potentially. But it’s interesting that it could destroy the shield.” ©

The blade was fashioned of a tough substance that could resist attacks from both Stormbreaker and Mjolnir. It broke Captain America’s Shield after repeatedly striking it, demonstrating its ability to break through vibranium (as we all know from the beginning).

As a result of what we’ve gathered, for now, Thanos’ weapon may be constructed of a sturdier substance than Vibranium alone, such as Uru, a metal that has existed since the beginning of the universe, used for Tony Stark suit and that can be enchanted!

The metal from which the Centurians forge their arrows surely is a great material for sword’s forging. But from what we can grasp from Marvel comics it’s a metal far inferior to Uru.

Adamantine(the material that Hercules’s mace, Neptune’s Trident, and Pluto’s Axe is composed of) also can be a valid hypothesis if we do not consider that it should be a nigh-indestructible metal.

Another fans’ theory is that Thanos’ weapon was constructed of Vibranium itself, which originated in space.. this is, therefore, plausible but really improbable.

What Is Thanos’s Sword Called?

We do not really know much about this blade, and the name is no exception.

The Double-Edged Sword is the only name given to Thanos’ sword.

In his tenure as a warlord in Avengers: Endgame, Thanos used it as his main weapon. Thanos then swapped the sword for the infinite gauntlet.

Thanos’ weapon has yet to be given a name, in the same way that Thor’s hammer has been given Mjolnir. So, for the time being, we can only allude to Thanos’ weapon in broad terms, like a double-bladed sword.

According to some beliefs, it was named Two Bladed Sword because the blades were on both sides of the handle, and there were two of them. Double Ended Sword is one of the names given to it by some of the fans as well.

Is Thanos’s Sword Stronger Than Vibranium?

This is one question tons of fans ask.. and here at swordscorner.com we have the solution!

Thanos’ sword is far stronger than Vibranium, as suggested by the shattering of Captain America’s shield and as the writers and directors confirmed near the movie’s conclusion and on the discussion track.

Towards the end of the film and its commentary track is where the writers and directorsJoe Russo and Anthony Russo along with screenwriters Stephen McFeely and Christopher Markus confirmed that Thanos’ blade, as was implied by its destruction of Captain America’s shield, is stronger than Vibranium.

“You can also see that while Vibranium is the strongest substance on Earth, whatever Thanos’ straight razor there is made out of is stronger,” Christopher Markus said.

But unfortunately, the sword wielded by Thanos in Avengers: Endgame was no fit for the deadliest metal known to man in the Marvel Cinematic Universecause eventually broke.

Captain America’s shield is composed of Vibranium, a super-strong metal found most often in Wakanda, while Thanos’ sword is made of something much more powerful.

Thanos from an alternative 2014 used the Quantum Realm to travel across time to the main timeline in 2023. They came from the Quantum Tunnel in the New Avengers Facility aboard the Sanctuary II and destroyed it with multiple missile attacks. This is the most probable theory about the destiny of his sword:

Thanos have now a weapon far more powerful than his Double-edged sword, why caring about it!

More About Thanos: Is He Capable of Lifting Mjolnir?

Thanos is one of the strongest characters in the Marvel universe… But is he strong enough to lift Thor’s Hammer?

Thanos is not able to raise Mjolnir yet since the Hammer does not consider him worthy enough.

Still, Thor’s nightmare hinted that it might befall in the future, so we’ll have to remain and watch whether Thanos rules to use Mjolnir Hammer.

The Russo brothers, who produced Avengers: Endgame, have at last spoken in on the subject of what Thanos’ sword is made of and where he obtained it after a long time of speculation.

What might it be constructed of if it was strong enough to smash Captain America’s shield?

To learn more, watch this video.