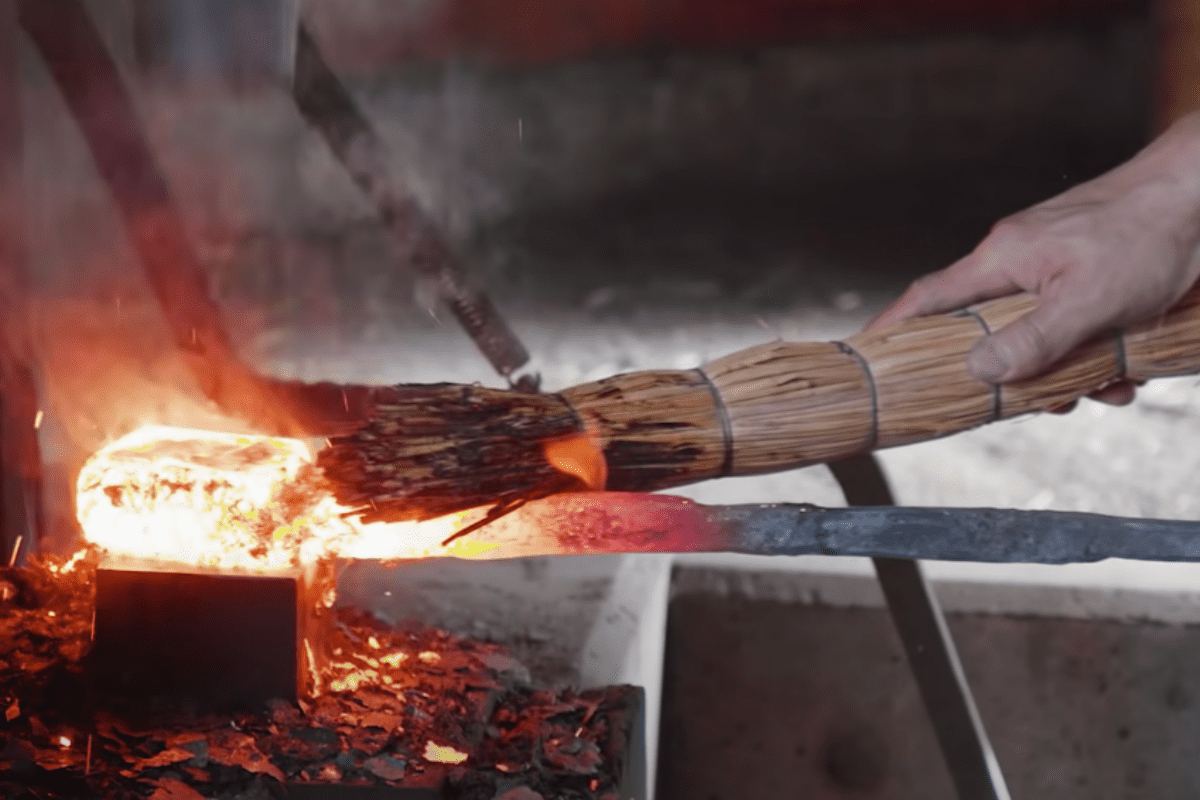 Whether you’re a long-time sword collector or someone who’s just started to dip a foot into the waters, you’d certainly know the type of steel used in crafting a katana. Yep, that’s correct—Japanese steel.

The best steel for crafting a Katana is tamahagane or ‘jewel steel’ when translated directly into English. Tamahagane is the best steel because of its high carbon content.

Anyway, tamahagane is produced mainly from iron sand, which can be found virtually all over Japan. However, iron sand isn’t an exceptional material, to begin with, because it contains a lot of impurities. That’s where the forging process comes in—along with other bladesmithing methods, which are crucial in crafting a battle-ready katana.

With that in mind, what’s in tamahagane that Japanese swordsmiths prefer using this material to construct a sword? Also, is tamahagane the most ideal steel for crafting a katana? Or is there a more preferable type of steel in crafting an extremely tough, break-resistant blade? We’ll do our best to answer those questions, so read on.

As mentioned earlier, Japanese bladesmiths prefer using the tamahagane when constructing a katana. They had been doing this for centuries. They prefer tamahagane because it has considerable carbon content. Carbon is a vital element in the sword-making process because of its ability to make steel tougher and maintain its sharpness for much longer.

Tamahagane contains from 1% to 1.5% of carbon, which is a favourable amount if you want to end up with a sturdy katana. Too much carbon could cause the sword to become brittle, which would cause the sword to break easily. On the other hand, steel with low carbon content would end up with the blade unable to hold an edge. For certain, given the nature of such blades, no one would consider them functional.

Traditionally, the procedure of making tamahagane involves heating iron sand to searing temperatures, around 2,500° F, which is near the melting point of iron. During the process, the swordsmiths would add charcoal, which is where the tamahagane gets its carbon content.

The smith would keep the tatara or forge going from a day and a half to three days straight. During those periods, most of the impurities would have been removed from the forging process and the carbon has settled into the iron.

The blacksmith would then examine the smelted pieces and select the ones that have a silvery colour on them which is indicative of high carbon content. Those are the tamahagane, and those are the bladesmith’s main ingredients in the construction of a katana.

Why Is Tamahagane the Ideal Material?

One of the main misconceptions about the katana is that the sword was created from some unique and special material. Of course, every serious katana collector knows otherwise. (It’s pop culture that made a great deal out of it, so you can unthank them later for this.)

Now, what’s in iron sand that makes tamahagane a less suitable material for making katana? Impurities, lots and lots of it. Despite its high carbon content, tamahagane simply contains too many unwanted inclusions that it can drastically affect the overall integrity of the sword.

Why still choose iron sand, you ask? Well, it just so happened that iron sand was the most abundant source for making steel in Japan. The bladesmiths during that time saw iron sand as the near-perfect ingredient that’s good enough for making bladed weapons, along with pig iron. Moreover, while these artisans made do with what was at hand, they employed forging techniques imported from China, such as the folding and differential quenching of the steel, to remove impurities and improve the toughness of the katana.

Ironically, even though the katana became the symbol of the samurai during the Edo period, these swords were often treated as a last resort in battle. Those elite warrior nobles would rather use long-reaching melee weapons, like the spear or yari. Ranged weapons, such as bows or yumi and the matchlock musket or tanegashima, were more popular weapons of choice for the samurai.

So, What Is the Ideal Steel for a Modern Katana?

Modern advancements in metallurgy and other such innovations have led to developments in the manufacture of tougher, industrial-grade, steel products. Because of their toughness, these materials have become suitable choices in crafting swords, particularly katana. Today’s sword-makers turn to these steel types because, as compared to tamahagane, they are easy to forge and contain virtually no impurities. With that said, the different types of steel that are ideal for making katanas are as follows:

Carbon steel is one of the most suitable steel types for katana-making. There are different types of carbon steel, and each is labelled according to the amount of carbon content. Three such examples of carbon steel that are popular among modern katana makers are as follows:

C1045 has set the benchmark in terms of toughness and pliability. However, if you want a katana that’s able to keep its sharpness for longer, you might have to choose a steel type with higher carbon content.

On the other hand, the C1060 is evidently a better choice for a katana because of its exceptional sturdiness. For that matter, this steel type strikes a balance in terms of toughness and sharpness, making them suitable for crafting functional, battle-ready katanas. However, making one can be quite challenging as compared to those with lower carbon content, like the C1045.

Lastly, the C1095 is extremely tough with a high percentage of edge-retention, which is definitely what you ought to be looking for in a katana. However, while you’ll feel tempted to perform tameshigiri or sword test-cutting with this type of blade, you’d be surprised that its edge is too brittle and prone to breakage. That’s because C1095 lacks the pliability present in other carbon steels with lower carbon content.

One of the conspicuous characteristics of the katana is its cosmetic value, which is often seen through the wavy or grainy patterns along the surface of its blade. For this reason, Damascus steel is also perceived as appropriate steel to make a katana with. That’s because Damascus steel is forged from a combination of steel, iron, and other metal alloys, which result in an elegant hamon pattern on a katana.

However, when it comes to toughness and edge-retention, Damascus steel isn’t always in the spotlight. Some are only valued only for cosmetic purposes and aren’t considered battle-ready. Other Damascus blades, on the other hand, especially those forged with durable metal alloys like magnesium or tungsten, perform beyond expectations.

First discovered in 1878, tool steel has gone a long way in terms of innovative developments. This steel type is often composed of different metal alloys like tungsten, vanadium, chromium, and molybdenum. Some tool steels even contain cobalt and nickel, which perform remarkably well in high temperatures.

What makes tool steel an excellent material for katana-making is its unbelievable edge-retention capability and resistance to wear, shock, scratching and even softening when subjected to high temperatures. Some examples of tool steel are as follows:

L6 bainite is one of the best tool steels that make an amazing katana. This low alloy steel has a high carbon content that ranges from 0.65% to 0.75%, as well as vanadium, nickel, manganese, and molybdenum. A katana made from this type of steel is a great find, so you might end up shedding a healthy sum of money.

Similarly, D2 tool steel is the proper material for katanas because of their high resistance to wear and extraordinary hardness. This type of tool steel has high-chromium and high-carbon content, thus its corrosion-resistant properties. A caveat: if you are planning to sharpen your D2 katana, you might find this challenging because these types of steel alloys can be difficult to hone.

In addition, T10 tool steel is equally a great option for katanas because of its high-tungsten content. Not only is T10 exceedingly resistant to scratching, but this steel alloy also has high edge-retention capabilities. Tameshigiri ad infinitum, anyone?

Apart from its durability, spring steel is also known for its ability to retain its original shape after being subjected to extreme bending, which makes it a perfect material for katanas. Two popular types of spring steel are ideal for making a katana. These are 5160 and 9260 spring steel.

When it comes to determining which steel is perfect for crafting a katana, the answer usually depends on the preferences of the owner of the sword. If you’re into the craftsmanship of the blade, you might go for a damascus or tamahagane katana. These blades are often appreciated for their cosmetic values.

On the other hand, if you are an iaido or kenjutsu practitioner who loves to engage in tameshigiri a lot, opting for shock- and wear-resistant katanas are a practical choice. Such katanas would save you the time, effort, and money of polishing or sharpening the blade because these katanas can take quite a beating.

Continue Reading
link to How to Become a True Samurai? A Beginner Guide

Cowboys and indians. Cops and robbers. These pretend games are just some of the activities that we love to play as children.  However, now that you’ve grown and have become a serious sword...