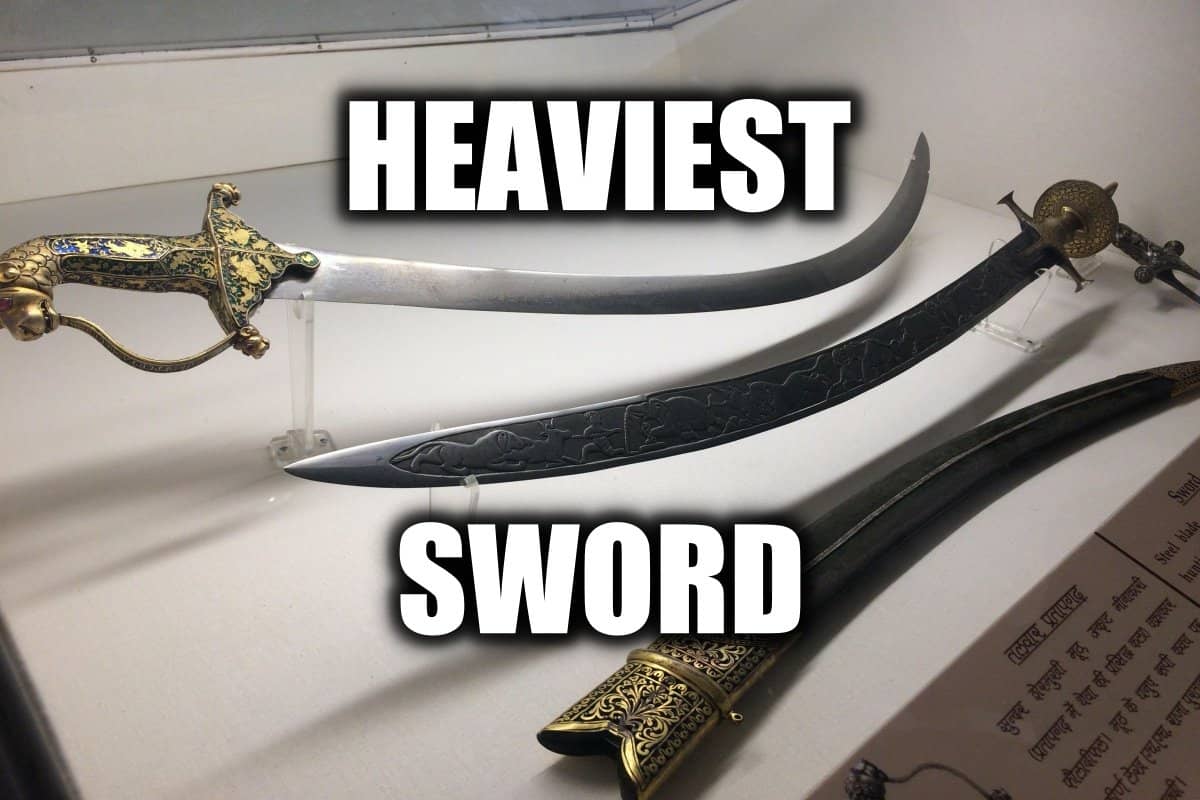 Legend has it that a certain Iranian warrior that goes by the name Mir Malagh Khan owns a sword that weighs 75 kg (165 lb). Though his existence had already been proven to be historical, nobody knows for sure if he really was using a sword with such massive weight.

You see, legend stories like these are embellished in an out-of-this-world proportion as they’re handed from one generation to another so we can’t really verify the authenticity of such claims unless historical evidence surfaces.

King Maharana Pratap have wielded two swords each weighing at 25 kg each. As for now these are the two heaviest swords ever existed. These two swords are being kept in a museum in India for safekeeping.

Pratap was a warrior and he used to carry two swords with him all the time.

Before any fight, the best swordsman would always give one of his swords to his opponent if he didn’t have any. Then if his opponent lost, he could blame his loss on the bad sword he was given. Intimidation was not his thing, as it’s only reserved for the insecure.

Rana Pratap has become well-known for his ability to be a weight lifter.

With just two 25 kg swords each in his hands, he challenged all comers. He was as tall as seven feet, and had a broad look.

But now let’s answer some of the most asked questions when approaching swords weight.

Are Real Swords That Heavy?

The weight of the sword should be in balance with the strength of the wielder’s arm. Swords with a smaller weight could be held by weaker people, but this was not the case with larger swords. Thus, a large sword would be more appropriate for a stronger person.

Medieval swords are not really as heavy as they were generally conceived. This is because the average weight of the medieval sword was in the range of about 1.1–1.4 kilograms (2.4–3.0 lb).

In addition, the weight of the sword is not even the most important factor in determining its use. Instead, the blade length and the design of the hilt were more important factors. As a result, swords with a longer blade were preferred over those with a shorter one. The length of the sword was also related to the size of the wielder. Larger swords were more useful for larger people.

If you want to know the differences of weight between the types of swords, here is our complete overview about all Western Swords Weights, check the article!

The hilt was another important feature of the sword. It was made of wood, metal, leather, or combinations of these materials. The hilt was usually attached to the sword by means of a tang.

Indeed, the heavier the sword, the more difficult it is to swing and therefore control, requiring greater skill and strength from the user.

How Heavy is a Heavy Sword?

Next, how heavy should a sword be in order to be considered a “heavy” sword?

I don’t think there’s any single, simple answer to these questions. I’d say that the best way to figure out if your sword is heavy enough would be to try it out for yourself. If you’re not familiar with the feeling of swinging a sword, then just use a lighter sword to get the feel of what you’re doing. If you’re not satisfied with that, then use a heavier sword.

Besides that, I think it would depend on your strength and the weight of the sword. The only way to really know what your sword feels like is to try it out.

The question of whether or not a sword is heavy enough is a matter of personal opinion. I personally think that a sword weighing around 2 pounds (1 kg) would be heavy enough to be called a “heavy” sword, but you can probably find a much lighter sword if you look around.

As the world’s foremost sword expert, Ewart Oakeshott, objectively states: “Medieval swords are not as intimidating as they appear to be in terms of handling and utility.” On average, medieval sword usually weighs between 2.5 lbs and 3.5 lbs. Even the bigger hand-and-a-half ‘war’ swords rarely weigh more than four and a half pounds.

If you want to discover more about Medieval Longswords Weight you can check our dedicated Longswords Guide in this article!

Who has the Heaviest Sword in History?

Always remember, you don’t have to be the biggest person on the planet to be the strongest. The same goes with swords: the largest does not mean the heaviest.

The overwhelming historical and archaeological evidence points to King Maharana Pratap as the rightful titleholder.

I am personally inclined to believe that Mir Malagh Khan should be accorded the title to have owned the heaviest sword in history, but the supporting evidence is weak.

What is the Maximum Weight of a Sword?

A good sword is one that feels balanced for you. It’s not one that you have to constantly readjust. A good sword should be comfortable in your hand. You should be able to grip the sword with ease and without thinking about it.

So, what is the maximum limit for a sword’s weight for stable maneuverability?

It seems to me that the answer is, it depends. In what manner, exactly? There are a lot of variables involved.