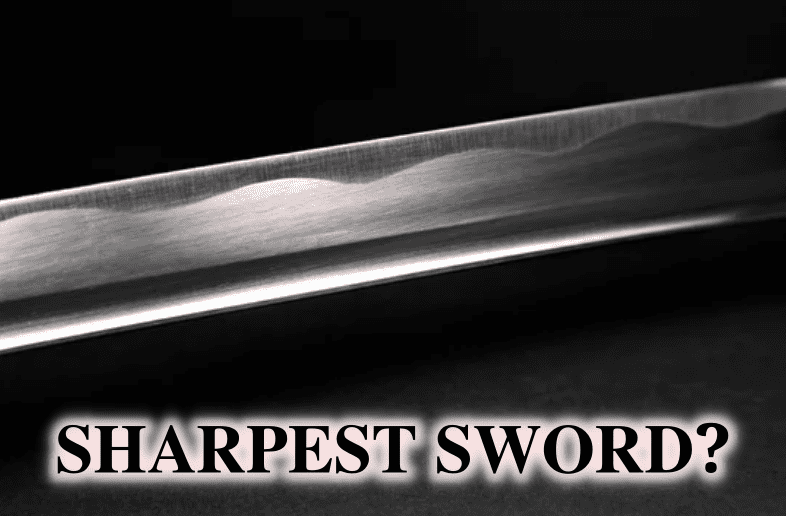 Questions like these always tickle our childhood fancy. Questions like, “Did the legendary Excalibur really exist and if it did, was it the sharpest sword ever to exist?”, “What was the steel used in forging Excalibur?”. It is just unfortunate that these kinds of questions are slowly being buried in our subconscious and remain unanswered as we grow up while we get ourselves preoccupied with life.

But now, let’s look back and answer one of the most fundamental questions we had as a child: what is the sharpest sword in the world and how is it made?

The sharpest swords ever made are swords made of Wootz Steel, a carbon laced steel developed almost 2000 years ago!

And now let’s discover why it’s so hard for modern metallurgists to recreate this kind of steel.

The Sword That Can Cut Through A Falling Hair

The Damascus sword is the sharpest sword in the world. It is said that it can cut through a falling hair & cut through a rock without dulling. Blades made of wootz steel, a material developed 2,000 years ago in India when the craftsmen added organic substances to their furnaces, are said to be air-cooled rather than quenched in water during the smelting and forging process. Its carbon-laced steel is both hard but flexible. This type of steel soon became famous for its edge retention which makes it the ideal material for a sword. Today’s modern sword-makers use advanced techniques in an attempt to reproduce the same results but failed. They can’t create the heat necessary and the amount of time the ingot must be exposed to such heat to produce a hard and tough wootz steel.

The Damascus sword is the sharpest sword in the world not because it is made from the hardest material known to man, but because it is smelted and forged in such a special way that even modern metallurgy can’t reproduce. It is said that no present-day metallurgist could find the sweet spot temperature necessary to reproduce the original wootz steel.

Wootz steel is extremely hard and has a high melting point. When it is heated to a certain temperature, it becomes malleable. When it cools, it retains the shape it was given when it was hot. This is why swords made of wootz steel are so tough and last so long.

They can withstand the rigors of battle better than any other type of sword. It has been said that no other material can compare with wootz steel when it comes to durability, toughness, and flexibility.

How Is the Wootz Steel Made?

It was assumed previously that the secret to creating this type of steel is subjecting the steel to extremely high temperatures, which naturally occur when the molten metal comes into contact with the intense heat of a fire or forge. Basically, this is how most of the swords are made.

These temperatures are so high that the atoms of carbon in the steel are forced into a crystalline structure making it far harder and tougher than any other type of steel.

These carbon atoms have to be present in sufficient quantities to make the steel harder. In fact, if it is present in too small a quantity the steel will become brittle.

This makes it extremely vulnerable to breaking when subjected to extreme forces. However, the carbon in wootz steel is bonded to the metal in such a way that it cannot escape and therefore retains its hardness at much lower temperatures than other steels. In addition, this type of steel can be hardened further by exposure to heat and this gives it an edge over other types of steel.

An attempt to reproduce the wootz steel by subjecting the ingot through high temperature was done by Albert Pendray, along with two Jordanian expert blacksmiths who brought iron ores to be used in the experiment from the legendary iron mine of Salahuddin Al-Ayubi (where the famous Damascus sword is said to have derived its iron ores from). Pendray was close by a whisker to get the original quality of the wootz steel.

However, wootz steel is not made from subjecting the ingots to high temperature but rather to low temperature over a long, sustained period of time, said British expert metallurgist Dr. Alan Williams. How low is the temperature and how long should the wootz ingot be heat-treated? Nobody knows.

They are very strong and almost impossible to destroy, yet they are also extremely lightweight. It is believed these carbon nanotubes are what gives Damascus steel its amazing properties.

These tiny tubes act as “frozen” lightning rods that channel the flow of electricity from one part of the blade to another thereby preventing a chain reaction that would cause the entire blade to soften.

How Do You Make a Damascus Sword?

The edge of a good modern sword will begin to lose its razor-sharpness after approximately 50 to 100 hours of hard use. A Damascus sword will retain its edge for a lifetime! How does a craftsman create a Damascus blade? First, he starts with a piece of wootz steel which is then heated to low temperature in a furnace over a sustained period of time. He adds a little carbon to the steel as it is being heated.

After the steel has been heated, it is not quenched in water but air-cooled which causes the atoms of carbon to form a crystalline structure around each other. The craftsman then reheats the steel and adds more carbon to it. This process is repeated several times until the steel has the desired composition. After this, the craftsman begins the process of tempering the steel.

This is done by heating the steel to a temperature between 1,000°F and 1,300°F and then air-cooling it again. The purpose of this is to make the steel as hard as possible without making it brittle.

Why Is It Difficult to Reproduce a Damascus Sword?

Despite this, modern metallurgists have difficulty reproducing a single Damascus sword! Why? Because no one really knows the ingredients of wootz steel and if someone does, it is very difficult to obtain the necessary ingredients to create this type of steel.

If the temperature of the fire or forge is not exactly right, if the amount of carbon added to the steel is not exactly correct, if the steel is not heated and air-cooled properly, if it is not heated and air-cooled enough, or if the tempering process is not done properly, the end result will not be a Damascus sword. The craftsman who makes a good Damascus sword has an “eye” for these minute details and he has the ability and the temperament to make a judgment call when something is not exactly right.

This is not an exact science but an art! And there is no substitute for experience! A perfect analogy here would be my grandma’s cake. I’d prefer my grandma’s cake over any other cake baked by a scientist, that’s for sure!

In addition, there are two main reasons why they can’t reproduce wootz steel: the first reason is that modern steel makers assume that wootz steel is produced utilizing extremely high temperatures. The second reason is that even if they knew the exact temperatures, they couldn’t produce steel with the correct carbon content to create Damascus steel.

The secret to making a good sword is not only to have the necessary ingredients and the necessary tools; it is also having the “eye” to know what to do with them. In other words, it is not a matter of just reading about it in a book nor is it a matter of simply memorizing a bunch of facts. You have to learn by doing.

The secret of making wootz steel is lost forever. Some people say it is the high carbon content that makes the steel so hard. Others say it is the addition of organic substances to the steel. Others say it’s the fact that the steel is not quenched but air-cooled during the entire process of smelting and forging of the iron ore. Whatever the reason, wootz steel is the hardest and most flexible steel that can be possibly forged to become the sharpest sword known to man.

There were several attempts, however, to reproduce the wootz steel, as previously stated. The most famous and the closest reproduction was made by the late Alfred Pendray. But still, it was a mere reproduction that still lacked what makes a true Damascus wootz steel.