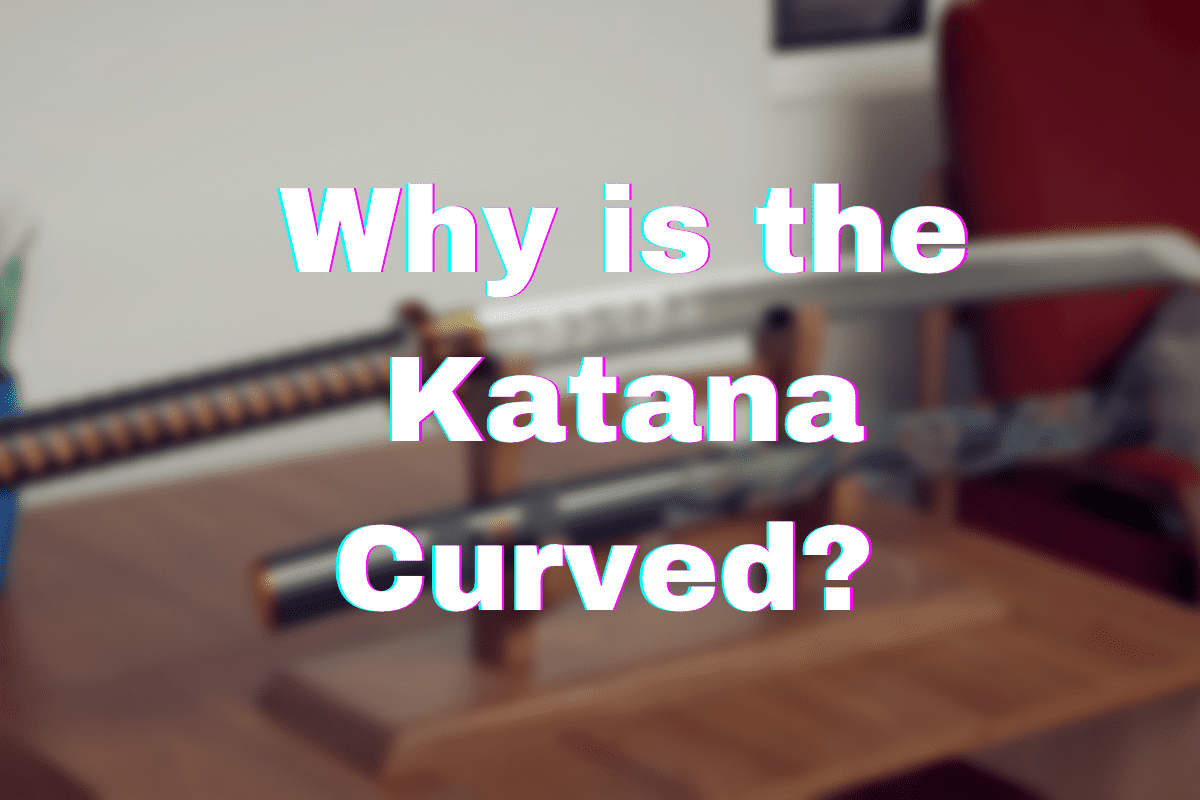 If there’s one aspect of the katana that makes it stand out among other swords, it’s the blade’s slight curvature. Also, if you give a katana a closer look, you will notice that the blade curves somewhat at the end, which seems nothing short of amazing, craftsmanship-wise. What’s awesome about this feature is that the katana enters the forge as a straight billet of carbon steel.

So where does the katana get its curve? If you think it has something to do with the forging process, you are definitely correct. However, the katana employs a rather unique and unconventional procedure to get that flawless, arcing edge. And that is what makes this sword stand out among the rest of the blades the world has ever known.

Why Are Katanas Curved?

During the forging process, the bladesmith conducts a procedure  called differential hardening. This method, otherwise known as differential quenching, is a technique in which red-hot steel is quenched in varying degrees.

What that means is that a swordsmith would quench the spine slowly, while the yakiba cools down at a rapid rate. The yakiba is the sharp part of the blade, which also includes the ha or the sharp edge. In this case, the latter would become very durable, while the former would become tensile and soft. As the blade is quenched, the blunt edge contracts in the process, while the sharp edge expands. As a result, the blade forms an arc which gives the katana its distinct curvature or sori.

What Is Differential Hardening?

Differential hardening is a method bladesmiths use to improve a blade’s toughness without compromising the overall hardness of the sword. For that matter, the katana becomes highly resistant to breakage even with an increased hardness on the blade because the spine remains ductile and soft.

This combination is what Japanese swordsmiths aim for when crafting a katana. In a way, this method is what makes the katana unique as compared to the swords being created during the medieval ages. Without this technique, the katana could either be soft and be too weak to withstand blows or too hard, making it brittle and prone to shattering.

How Do Bladesmiths Perform Differential Hardening?

When performing differential hardening, katana craftsmen would apply a thick layer of clay slurry along the body and spine of the blade, and a thin layer along the yakiba of the katana. This mixture acts as a kind of regulator for the cooling process of the steel.

Japanese bladesmiths call this method tsuchioki, or clay tempering. Apparently, the swordsmiths of feudal Japan were the first to use this technique in forging a katana. In fact, it is through this process that the katana acquires its signature hamon line.

What Is the Clay Mixture Made Of?

Literally, tsuchioki means ‘to put dirt on.’ In the case of the yaki-ire or clay tempering, the bladesmith would have to smear the katana with a clay slurry. To think of it, the process of applying wet clay on the blade before heat treatment may seem like a walk in the park. Truth is, this procedure requires meticulous work. Otherwise, a wrong mixture or an uneven application could ruin the structural integrity of the sword.

So, what does this clay material have that makes it special? The slurry is composed of stone powder, regular clay, and charcoal powder. The exact ratio when combining any of the materials is one part each. Some swordsmiths would add a certain ingreident into the mix, which may serve as a secret recipe.

Interestingly, each ingredient serves a crucial purpose. The clay makes the slurry stick on the blade. The stone powder, on the other hand, keeps the material from shrinking when it dries up. The charcoal keeps it from flaking off as the fire would cause heat expansion once treatment begins.

What Is a Hamon Line?

The hamon line is the patterned outline along the katana which creates a distinction between the tough, martensitic blade and the pearlitic or ferritic spine. This feature is a direct effect of differential hardening. The fast cooling rate hardens the yakiba, while the spine contracts and pulls the kissaki backward, while the ha moves outward, which accentuates the curve.

One of the common misconceptions about the hamon is that it creates a distinction in the quality of the blade. Some katana collectors think that the hamon line serves as a boundary between the tougher edge and the soft spine. This is far from the truth because the hamon temper line is nothing more but a pattern created during the differential treatment process after the application of the tsuchioki. In other words, the hamon does not affect the overall quality of the katana or its sharpness.

What makes the katana a wonderful sword is that it can be a work of art. The hamon is one of the several aspects of a katana that adds to its aesthetics. In case you are wondering, yes, the hamon comes in different patterns and each provides a particular appeal to the blade. The different kinds of hamon are as follows:

The suguha and the midare are the most common types of hamon line that bladesmiths use on a katana. The suguha, or straight blade, is a pattern variant that runs parallel along the surface and edge of the blade up to the tip. Depending on the amount of coating used, this pattern could be described as hoso (narrow), chu (medium), and hiro (wide) suguha.

Meanwhile, the notare refers to the hamon pattern that depicts the gentle movement of water. The famous katana bladesmith, Masamune, first pioneered the notare pattern. This hamon design emerged during the last leg of the Kamakura Era and became popular among bladesmiths during the Nanbokucho Period.

The choji, or cloves, was named as such because this hamon resembled a series of clove buds arranged together in an irregular pattern. This hamon became famous during the Muromachi and Edo Periods and had several variations.

The hitatsura is a hamon pattern that resembles clusters of tobiyaki (tempered spots) along the length of the blade. Like most of the other hamon patterns, the hitatsura became popular even before the katana was invented.

The gunome hamon pattern, on the other hand, is likened to a series of arcs which resembled the stones in the strategy board game go. Gunome could be traced back in tachis during the Muromachi Period, and came with variants.

Finally, the toranba became famous during the Edo Period and became one of the most popular because of its unique, dynamic pattern. According to experts, the hamon pattern resembles an undulating wave moving to and fro.

What’s interesting about these hamon patterns is that some of these styles have emerged even before the samurai started using the katana. This detail translates to the fact that the bladesmiths in Japan had already discovered differential treatment and might have been using this technique on the tachi. The tachi was the precursor to the katana and were widely favoured by mounted samurai.

What Are the Advantages of a Curved Sword Like the Katana?

The debate that curved swords are better than straight swords, like those used by the medieval knights of Europe, has gone for as long as the very first warriors that wielded such blades. Truth is, both the curved and straight swords present a certain advantage over the other in terms of usage.

For this section, however, we’ll only discuss the benefits of using a curved sword to determine what makes the katana such a formidable weapon in feudal Japan. The 3 different advantages of a katana are as follows:

The katana’s curvature enables the wielder to cut through a target once the blade strikes it. Unlike straight swords which could get stuck, a curved blade allows the wielder to slash through the target, therefore, enabling you to cut at a target through and through.

The curve of the blade aids in the movement of the wielder’s arm as they draw the blade. This is true among iaido and kenjutsu practitioners who have been practicing the art of drawing a katana for the purposes of tameshigiri or sword test-cutting.

Interestingly, the katana’s curvature makes it easier to swing because the curve places the center of balance closer to the wielder. Balance is an important aspect of the katana because it helps make the swinging faster and more efficient.

Final Word — Why Is a Katana Curved?

The process of constructing a katana is pretty interesting because of the methodical procedures involved during its creation. That’s because if you look at it, you will realize that it is not just differential hardening that is key to the overall toughness of a katana.

There is also the process of clay tempering, which does not just help in the strengthening of the sword, but it also improves the aesthetic of a katana with its hamon line. More importantly, both these processes are also what gives the katana its distinct curve or sori, which gives advantage to the wielder.

For a sword enthusiast, these details—the sori and the hamon patterns—are what makes a katana worth collecting. While others may overlook the commonness of such features, a collector sees nothing else but a work of art that boasts of a slice of history in it.